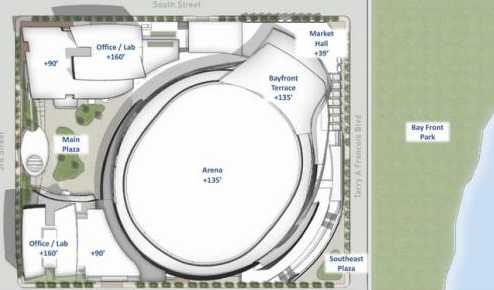 Images of the Golden State Warriors’ proposed new San Francisco arena went viral on the Web this week, due to the fact that they made the building look like a toilet.

The comparison of the preliminary design of the Warriors’ new arena in San Francisco to a toilet seat is “unfortunate” because it does not reflect the final result, a team spokesman said Wednesday.

Warriors spokesman PJ Johnston said the design for the arena that replaces Oracle Arena as the team’s home will “absolutely” change in the coming months, emphasizing that the drawings created by MANICA Architecture were not detailed renderings.

“I guess that’s the perils of the Internet,” Johnston said of the reaction to the drawings, adding that they were created to offer citizens information on the height, bulk and context of the arena. “First impressions are first impressions. We’re confident though that when this design is further refined and really comes together, people will not only see what we’re trying to accomplish like with the raised bayfront deck, but they will definitely see a more nuanced and beautiful rendering that will frankly just better showcase the design that than these do.” […] “It will be pretty cool and people will like it,” Johnston said.