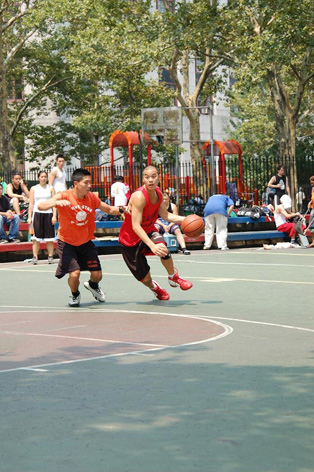 For many New Yorkers, basketball is more than merely a game. It’s a staple of the community from which they come, an ever-present pastime that is as rich in history and tradition as the city itself. For the New York Rockits, an organization dedicated to basketball in the Asian community, celebrating basketball culture means celebrating their own culture.

“This is probably the biggest event we will have all summer, and it’s totally dedicated to Asian players” says Nelson Yu, a long time Rockit player and now coordinator. “It started off as Chinese, but now we take anyone of Asian decent.”

Over the past 13 years, Asian basketball teams from around the United States gather in Manhattan for the “Asian/Oriental 3×3 Basketball Championship” sponsored by the Rockits organization. This year, over 125 teams competed for titles on 13 different skill levels. In fact, the event is so popular in the Asian hoops community the tournament is spread-out over two weekends and requires the full use of two city playgrounds.

“Our motto is ‘Score some points, win some games, and most of all make some friends,’ says Yu. “This is done as a non-profit event and it’s really all about community work.”

While many of the players running in the 3-on-3 tourney are there for pure recreation, others are keeping their games sharp for the wintertime. A quick look at the Rockits’ alumni roster shows steady progression from an organization once designed to keep the kids of Chinatown off the streets to a serious hoops group that produces college players on all levels.

“The Rockits are totally different from any other organization because we do the most charity work,” says Chris Chin, a thousand point scorer at Forest Hills High School in Queens, who played his college ball at D3 Baruch College in Manhattan. Chin helped his squad capture their second consecutive All-Star Division Title and is humbled by what the Rockits offer their community. “We take pride in offering people who don’t play high school or college ball a place to play and have fun.”

As there is little doubt that the Rockits-sponsored 3-on-3 is a day for fun, there should be equally little doubt as to how serious this organization can be. Besides Chin, several former Rockits have gone on to ball at the college level. Brian Wong, who walked on to Monmouth University’s team a few years back, Kevin Chin, who is the all-time leading scorer at the Cooper Union institute, Kevin Low at NYU and Jarvis Miu at City College are all former Rockit stars. More so than anything, the Rockits function as an alternative to roaming the streets.

“We try and keep it all about basketball” says Nelson’s younger brother Kenny Yu, a former captain of the Rutgers-Camden basketball team and 1,000 point scorer at Townsend Harris High School in Queens. “We had practice with the Rockits on Friday night from 6 to 10, so, if you’re in the gym then you’re not on the streets.”