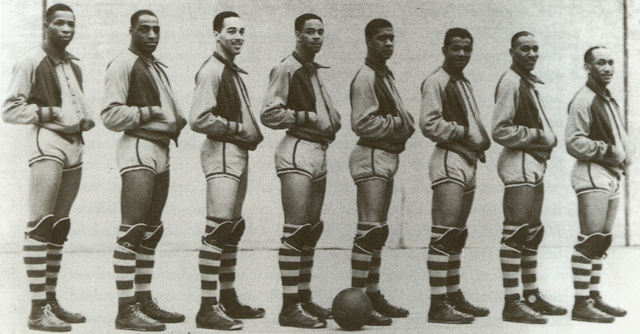 A pro basketball pioneer from the early days of the game, John Isaacs died this morning in the Montefiore Medical Center in the Bronx. The “Boy Wonder,” as he was affectionately called as a teenager playing for the New York Rens, suffered a stroke a few days ago. He was 93 years old. In his memory, we present a feature on the N.Y.C.-bred hoops legend, which was originally published in SLAM 116.

When SLAM asked me to write something about 93-year-old former professional basketball player John Isaacs, I wanted to give John the chance to mix it up with me about the meaning of his life—so far. Over 50 years ago, Isaacs won basketball championships with the Harlem Rens and Washington Bears, two teams that are only now beginning to get mainstream commercial attention, thanks to a vintage-inspired sneaker collection by Converse that commemorates their legacy.

“Most people think basketball is a way out, but for me it’s always been a way in,” explains Isaacs, who says it was never only about the game. Basketball has allowed him to help make a difference in people’s lives. “The Rens didn’t just represent Harlem,” he says. “We made black America proud as much as Jesse Owens, Joe Louis or Jackie Robinson.”

Ever humble, Isaacs seems more fulfilled with what he’s been able to accomplish through the game. “The most important thing back then is still as important now,” he says, leaning closer. “It’s giving. What can you give?”

Isaacs has given too much in both time and money to list here, but mostly he’s given of his heart. Still, a taste wouldn’t hurt. Isaacs was a fiery, powerfully built 6-1, 190 pound All-City guard who led his Textile HS (now Hughes HS) basketball team to the New York City HS Basketball championship title in 1935.

The owner of the Harlem-based New York Renaissance (“Rens”), Hall of Fame member Robert Douglas immediately offered him a pro basketball contract. “Yes,” Isaacs replied, “but I have to go home and clear it with my mother.”

Mom said okay, and Isaacs promptly led the all-black Rens to astonishing season records of 122-19, 121-19, and 127-15, followed by the championship title in the first World’s Professional Basketball Tournament, held in 1939 at the old Chicago Stadium, the building MJ made famous. (“Pardon me,” Isaacs likes to say, “but the Rens brought home New York City’s first official pro basketball title, not the Knicks!”) Isaacs won the title again in 1943 as a star with the all-black Washington (DC) Bears.

“We earned about $125 per month back then,” Isaacs says, “so the tournament prize money was a big deal.”

After leaving the Rens and Bears, Isaacs played with numerous other all-black pro teams, including the Manhattan Nationals, Hazleton Mountaineers (Eastern PA Basketball League), and Utica Olympics (New York State Professional League), as well as with Brooklyn and Saratoga (American Basketball League) into the early 1950s.

“It was normal,” recalls Isaacs, “for guys to play in Pennsylvania for one team in the morning and in upstate New York for a different squad in the afternoon.”
How was Isaacs as a teammate? “I liked helping the new guys,” he says. “That’s what the fellas did for me when I was a rookie.”

Isaacs, Panamanian-born, New York City-bred, may have felt compassion for feeling like an outsider. “I learned my trade mostly from John Isaacs,” says former Harlem Yankees and collegiate star Donald Hinds, also in his 10th decade. “I was a jumper, a rebounder, but my jumping didn’t make any sense against Isaacs because he could take a finger and get me off balance and the ball would fall right into his hands.”
The Yankees, a farm team for the Rens, produced such top players over the years as Hank DeZonie, Puggy Bell and Sonny Woods. Isaacs played for the team as he neared the end of his pro career and also helped coach. “He taught me

all the tricks of the trade,” Hinds says of Isaacs.

In the late 1940s, Isaacs helped form a pro basketball team in Harlem called the Manhattan Nationals, whose sole purpose was to fight juvenile delinquency. They did it by featuring social service agency youth teams in their preliminary games. The Nationals included Larry Doby, who would soon become the first black player in baseball’s American League, as well as former Rens stars Bell, Charlie Isles and Isaacs. Isaacs and Isles played without pay, instead donating their earnings and time to the worthy cause. “Few people know about that,” admits Isaacs.

Isaacs has also been a tireless fundraiser for the John Hunter Memorial Scholarship Fund, which helps send New York City kids to summer camps and college.

The company he keeps measures the man. At the recent grand opening of the House of Hoops store in Harlem, Isaacs shared the stage with Julius Erving, Chris Mullin, Charles Barkley and Kenny Smith. He certainly deserves to be in that lineup. Isaacs coached many future stars when they were kids, including Mullin. “I reprimanded him one night at a sleepover basketball camp for staying up past curfew,” Isaacs remembers. “I made him run laps but I also noticed that he was up early the next morning practicing his jumper from every spot on the court.”

Isaacs also coached teams in the early Rucker Park basketball tournaments and has been a fixture at New York City playgrounds and gyms ever since. “I cover playground basketball in Harlem for a living, and I’ll see Mr. Isaacs at Pelham Fritz, Uptown Express, Rucker Park, Kingdome,” says publisher, sneaker aficionado, DJ, author and basketball talent Bobbito Garcia. “He is the immortal teacher yet humble enough to be the perpetual student.”

Later this year, Isaacs will celebrate 50 years (!) of working for the Madison Avenue Boys and Girls Club in the Bronx. Isaacs has been concerned about youth as long as he can remember and admits he too was once a lad running the streets of Harlem, sometimes one step ahead of trouble. “My parents were strict,” he says, “and what I noticed at the Boys and Girls Club is that for some of these kids, we have to be their surrogate parents.”

Isaacs says he has no problem calling someone’s guardian to discuss a kid’s behavior or reinforce a suggestion. According to Isaacs, nothing is more refreshing than listening to the success stories of his club’s alumnae at their annual reunion. At 93 years old, Isaacs still asks his supervisor for permission to cut out for an interview. The man has made himself indispensable. Repeat after me: If he can do it, I can do it! Who wouldn’t be inspired? No wonder some 3,000 friends attended his 90th birthday party.

“For only what you give away enriches you from day to day,” John Isaacs likes to say, quoting Helen Steiner Rice.

In that case, he’s a very wealthy man.