Joel Embiid and Hassan Whiteside engaged in an amusing social media flame-war Friday night, but Whiteside says it was all in good fun.

Embiid triggered the back-and-forth by mocking Whiteside for picking up three quick fouls in their preseason battle. 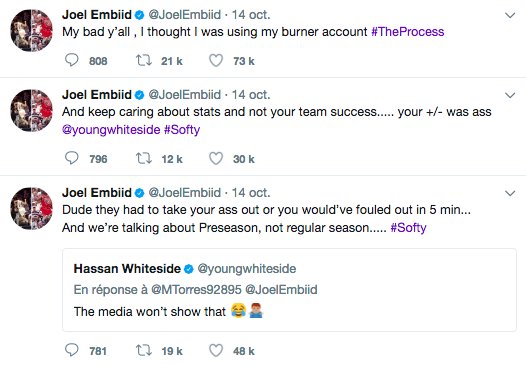 Video: Hassan Whiteside says it's all in good fun with Joel Embiid. https://t.co/7vuBlQ2DUh … Or is it?

Whiteside said it is nothing more than respect between what Heat coach Erik Spoelstra called “titans” of the game.

“Ever since last year, my very first words to Embiid was, ‘Man, I’m glad to see you back on the court.'” said Whiteside, with Embiid’s NBA debut delayed by a foot issue, one Whiteside playfully cited amid their Friday late-night Twitter exchange. “He told me we’re going to bring the center position back. And after they won, he called me, ‘barbeque chicken,’ so I was waiting to get back at him.”