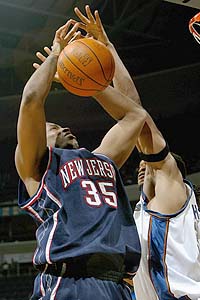 This is the kind of game I usually skip. Knicks versus Nets, the two teams I see the most playing against each other. Where both locker rooms feel like the home side, and I don’t see anyone—players, coaches, media or otherwise—that I don’t see at least once a week anyway. But hell, Madison Square Garden is right around the corner from the crib, a five-minute walk, and the Knicks haven’t been home in a while. I’m in. Here’s a couple thousand words to prove it.
PREGAME

I’m joined tonight by Sam Rubenstein and Lang Whitaker. Who are presented by Vonage. (Oh that’s right, that’s only in Jersey. My bad.)

There is a LOT of media here. Somehow it feels like a playoff game, despite the fact that the teams are a combined eight games under .500. Yet one of them will most likely make the playoffs. Gotta love the Atlantis Division.

I’ve never attended one of Isiah Thomas’s pre-game press gigs before, so there’s no time like the present. I follow the herd of local press into the “multi-purpose room” (I can’t for the life of me figure out what other purposes it would serve, by the way. Storing cleaning products? Conducting a driver’s ed class? Interrogating terror suspects?) and settle in a seat in the outer ring. Isiah eschews (like that?) the table up front for a chair in the midst of the beat guys. Big smile in full effect. He’s just folks, folks. And his comments are, well, pretty accurate. “I’m not sure if it’s a rivalry yet,” he says of Knicks/Nets. “You need two good teams. We know they’re a good team. We’re trying to crystallize and become a good team.”

Isiah on the Nets winning 20 of the teams’s last 24 matchups: “They’ve just been that good. Kidd, Jefferson, Carter, and Kidd, Jefferson, Martin. You’ve got to give them respect for what they’ve done.”

And on the Nets sweeping the Knicks out of the playoffs his first year at the helm as team president: “I said we gotta get some better athletes. They were faster, jumped a little higher. They were bigger, faster, stronger at every position.” He goes on to add that the Knicks have done just that, which is true. After all, Jerome James alone is bigger than the Nets.

On the Pacers, their next opponent, who just traded half their roster: “I do expect them to be a better team. Just watching them last night, the chemistry is better.” Isiah, of course, coached the Pacers with Jermaine O’Neal and Al Harrington. He also speaks from experience about how a depleted roster can actually have better chemistry.

Not much going on in the pre-game locker rooms. I spend most of my time talking to Howard Beck, the Knicks beatwriter for the New York Times. Good people.

We all (Lang, myself, Sam, Howard) pause to chat with Nets PR/in-arena announcer double-threat Gary Sussman on the sidelines. It starts with discussion of the controls for the 24-second clock—which look so old that it’s possible that Danny Biasone made them in his basement in the ’40s. Quite the contrast to the little flatscreens in front of each super-expensive courtside seat where the beatwriters used to sit. Sussman just wants to make clear that what he ACTUALLY said to Jake about the game he gave him on DVD was that “you have a better chance of seeing Jesus.” Not that whole “in the flesh” thing. Sussman’s right—it sounds better his way.

Food report. Pretty gross, and ridiculously unhealthy. A tray of corned beef, a tray of pastrami, and a mess of rye bread. Oh, and a tray onion rings that look like they were cooked at Jiffy Lube. I give it a C. At best. The carrot cake is on point, at least.

The Nets have a lot of fans in the building, most noteably a bleached-blond California-in-a-bad-way couple in matching white Jason Kidd jerseys immediately to the right of the Gate 64 press box. They’re loud and obnoxious from the start. Fantastic. But hey, they’re from New Jersey. They can’t help it.

The Nets are in their alternate road red. Probably the best alternate uniforms in the League. At least they’re not black.

Jay-Z is a late arrival.

Eddy Curry “E-City” gets his first rebound with 10:45 to go in the first and follows it with an alley-oop. The Knicks jump out to a 6-2 lead, although I predict it won’t hold.

Whenever Jason Kidd gets the ball in the backcourt—whether it’s on a rebound or a steal or a deflection—he’s probably still the fastest guy in the League from free-throw line to free-throw line. There are guys in the League faster than him, of course, but Kidd just KNOWS where he’s going at all times and gets there. So fun to watch.

Speaking of Jason Kidd, I’m AMAZED that the Knicks didn’t hook up Joumana with a front-row seat. Or one right behind the Nets bench. Kidd seems pretty much unflappable, but it would have been fun to watch.

RJ shovels a pass to Mikki Moore underneath for an easy dunk. He’s been getting a lot of those lately. 10-all.

The loudmouth Nets fans to our right—the ones who get their highlights from the same bottle—are already starting to go hoarse. Which is probably good for them, since many of the Knicks fans around them are starting to look a bit murderous.

At the 4:18 mark, Eddy Curry commits his Predictable Charge Of The Night™. Enter David Lee to much applause. It’s still amazing that he doesn’t start, especially since Jared Jeffries has been pretty much terrible.

A couple passes here, a couple there, and Marcus Williams sends up a perfect diagonal alley-oop to Josh Boone. Very nice.

Uncle Cliffy hits a three from the corner, courtesy of a Vince Carter pass.

David Lee splits a double-team—backwards. It’s hard to explain. Neat move, no results. Then it’s Marbury and Lee on a two-on-one break with 64-year-old Uncle Cliffy back, and they throw it away.

There’s no shortage of in-arena promotions at the Garden, but this one is the best so far: “Who Wins The Oscar?” with three Knicks delivering a movie line. In this case it’s Jerome James, Eddy Curry and Jamal Crawford with Renee Zellweger’s “you had me at hello” speech from Jerry Maguire. James and Crawford are amazing; Curry, not so much.

The Pressroom Food Horrible Sequence Of The Night™: Nate Robinson misses a shot badly, the Nets recover, and Marcus Williams fires a pass to Boston Snackbar, who isn’t even looking. Quality basketball. The Knicks then go on to commit their second defensive three-second violation of the first half.

Kidd goes around a screen, and as Marbury follows, he runs into Quentin Richardson, busting him in the chops. Kidd gets fouled, and makes both. Then he finds Jefferson with an outlet pass, and the Nets have their first double-digit lead, 40-29, with 5:10 to go in the half.

Richardson follows a Kidd 2 with a trey (guess his mouth is OK), but the Nets bring out their secret weapon following a time out: Eddie House. And, right off the bench, Casa (read Jack McCallum’s book on the Suns!) wets a three of his own. Next possession? Another one. The man has no conscience.

Vince Carter checks back into the game—with House so hot he’s glowing—and immediately hoists up a bad shot. He then compounds it by fouling Frye. He makes up for it a minute or so later by dunking all over Frye in the halfcourt. So nasty. But damn, man, pass the ball, dog.
Other stuff happens, including an Eddie House 23-8 two-pointer.

With seven-tenths left, the Knicks inbound from underneath their own basket. Frye is the passer, and he unleashes his inner Peyton Manning, firing a pass the length of the court—and out of bounds. No time off the clock for the Nets, who get to inbound under their own basket. Renaldo Balkman checks in for the first time, virtually assuring himself a trillion. And Vince gets a clean look at a three—and misses.

The Nets try and open the third quarter with a play they’d run before. Curry astutley breaks it up. And then the Knicks commit a three-second violation. Oh well.

VC takes a bad shot, gets the ball back, and takes an even worse one. He comes back downcourt slowly, holding his eye. Lang: “If Vince got hit in the eye, so did I.”

Mikki Moore shoves Eddy Curry, who falls into Jason Collins, knocking him down. Maybe the Nets big men are all out to get one another? Or maybe they just want to send Eddy to the line as much as possible. Miss, miss.

Jeffries commits his fourth foul with 4:53 left in the third. Leaves for Lee, who checks in to much applause. Again.

Jason Collins picks up his fourth as well. He’s got four rebounds and no points. Let’s hear it for the worst starter in the NBA!

Actually, the New Jersey superfans would probably cheer for him. The hoarseness, tragically, didn’t last. (Sample cheer. “GO J KIDD! THEY CAN’T STOP YOU! IT’S TOO EASY! JEEEERRRRSSEEEEYYY!!! WHOOOOOOOOO!!!!” It’s like that, only much worse. I find myself yearning for Thunderstix. To beat them to death with.

Another promotion. Two fans on court. A casually-dressed woman, and a guy in a white Patrick Ewing throwback. They’re asked a single question, with the one closest to the real answer getting to choose whether to shoot a free-throw or not. The question: “How many total assists did Clyde Frazier have as a Knick?” Woman’s answer: 300. Embarassing. Soooo bad. Wide open for my man in the Ewing jersey. Who says…11. Yes. Eleven. Total. Ever. That’s, oh, 4,780 off. He gets booed loudly, and gets off light. His jersey should have been confiscated, for starters.

The Knicks inbound on the ensuing play…and turn it over. Good going.

The Knicks have taken WAY more free throws than the Nets so far. Neither team is hitting many of them, though. More on this later.

The Nets go back up double digits with under 10. Up 13 on a Josh Boone putback with 8:09. But a Q trey and a Crawford floater brings it back to eight. The Nets get it back to 10 with just over five minutes to go.

Eddy Curry tries to go through Jason Collins, and goes sprawling. No call. He wants the blocking call, and yells at the ref about it. Meanwhile, the Nets go back the other way, and Uncle Cliffy scores. And if anything, it was probably an OFFENSIVE foul. 92-80 Nets, 4:55 to go. 95-83 with 3:40.

And the Uptempo Collapse™ comes—from the Nets. Starbury and David Lee lead the attack, and the Nets help by missing free throws. It’s a one-point Nets lead with 40.9 seconds, and a one-point Knicks lead (courtesy of a David Lee putback) with 9.7. The crowd is going completely insane.

One last chance for the Nets, and Carter’s shot rims out, but there’s still time, and although Eddy Curry has position, Uncle Cliffy has guile, and he goes up over the top and tips it in with 2.8 seconds to go. The Knicks are out of time outs, and the best they can manage is a Starbury heave from three-quarter court that bounces harmlessly off the side of the rim. Final score, 101-100, Nets. Thats 21 of 25.

Even I have my limits.