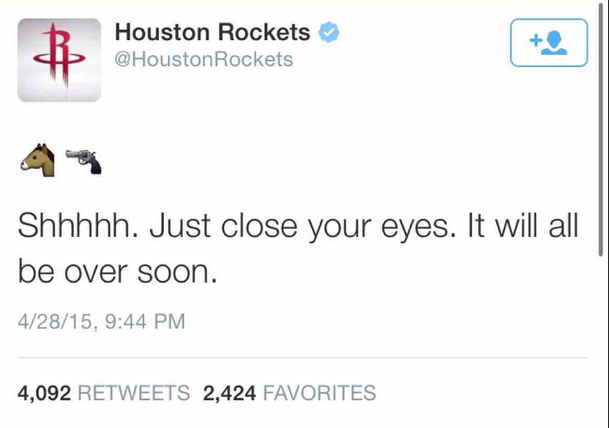 Social media is no joke when it comes to the NBA.

Members of the Houston Rockets’ digital media staff were feeling themselves Tuesday night, as their squad put the finishing touches on a 103-94 in Game 5 victory against the visiting Dallas Mavericks, and fired off an inappropriate (yet amusing) tweet.

Having eliminated the Mavs from the Playoffs, the Rockets were forced to issue an apology for their poor choice of emojis.

@HoustonRockets Not very classy but we still wish you guys the best of luck in the next round.

Our Tweet earlier was in very poor taste & not indicative of the respect we have for the @dallasmavs & their fans. We sincerely apologize.

UPDATE: Unfortunately, someone lost their job over this.

Sometimes you can go too far. I will no longer run @HoustonRockets but am grateful to the organization that let me develop an online voice.