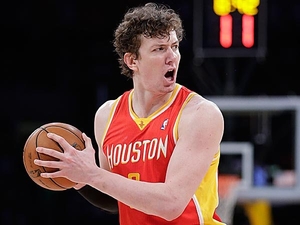 The Rockets’ self-imposed deadline to trade disgruntled center Omer Asik came and went, and Houston will reportedly hang on to the big fella for a little while longer.

Despite plenty of speculation that a three-team deal was in the works, Asik will continue to work and live in H-Town for the time being.

Asik has a $15 million salary-cap hit next season, and that, combined with rival teams’ unwillingness to package a quality power forward with an unrestricted first-round draft pick, pushed Morey away from making what he believed would be a bad deal now. Boston had offered Houston a package of Brandon Bass, Courtney Lee and a restricted future first-round pick, but the sides could never come to terms on an agreement. Philadelphia had remained in pursuit of Asik, but Morey found no deal there, either.

Omer Asik demanded a trade as soon as Dwight Howard joined the team through free agency last summer, and has done everything to find hind himself a new employer. So far, no dice.

The NBA’s trade deadline is on February 20. It would be hard to imagine this unhappy marriage lasting past that point.