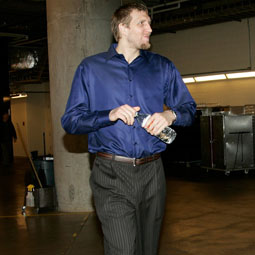 Dirk Nowitzki is a giant German piece of sh*t.

This, somewhat understandably, is the consensus reached by many of you who care about The Game of Basketball (copyright Michael Jordan, 1989). The logic goes like this: Yeah, he put up great numbers during the regular season, and yeah, his team had the best record, but look at him now! He sucks. He can’t even get his shot off against the No. 8 seed. He’s garbage. And he’s definitely not the League MVP.

Fair enough, except for that last part. Because he probably is.

The annual MVP argument is a lot of fun, and the fact that it is such an argument is something David Stern & Co. are well aware of — they LOVE how the undefined requirements of that award inspire so much discussion, because it means we all spend way too much time talking about their League. Hopefully, we’ll spend the next few days talking about this instead. (Guess these guys didn’t watch the Finals last year, huh?)

I’m not saying these cases are identical, nor am I denying that Dirk has disappointed in the postseason. I’m only asking for perspective, and (hopefully) reminding you that there’s a precedent for this sort of thing. What Dirk does have in common with guys like DRob and Charles is that he was rightly praised for helping redefine his position (Bill Russell with a mid-range jumper? A 6-5 Moses Malone with a handle? You get the idea) but, like them, he’s apparently not good enough to single-handedly lead his team to a ‘chip, and he’s catching a lot of crap for it. But again, where the MVP is concerned, none of that matters.

Of course, you might not think Dirk deserved the MVP even before the playoffs started, and that’s valid. You could argue for Kobe or Steve, and you can even argue that Dirk’s not the most important player on his own squad (step up, Josh Howard—or whatever we’re calling you these days). All of which is fine by me. Just don’t forget that his case is strong as hell: 25 and 9 on a team with the League’s best record. And, as un-clutch as he may have looked for the past few weeks, he did average 27 and 12 in last year’s playoffs, so he’s not completely unproven on the big stage.

Anyway, just to be clear, I’m no Dirk apologist, or anything close to his biggest fan. I just get vexed by how irrational we become in situations like these. I have vague but intact memories of Magic Johnson being labeled as overrated and a choker in the early ’80s. I remember a young Michael Jordan being called a ballhog who lacked the leadership skills to carry his team to a championship level. I watch LeBron James being written off as a lazy, inconsistent underachiever who will never win a championship. And I listen to Dirk Nowitzki being called a worthless b*tch because he’s had a few bad playoff games.

I’ll I’m saying is, perspective is healthy. Don’t be hasty. Step back for a second and try to think long-term.

Or don’t. Rational thought doesn’t lead to nearly as many entertaining (not to mention ad-generating) posts on our website. Never mind.