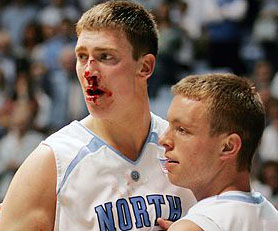 I’m not a bloodsport theorist or anything like it, so get that notion well out of mind before continuing. Fights in sports, usually, are impulsive and most-of-the-time failing excuses to do something, anything, that ends in you looking very cool popping your jersey.

But Sunday’s Duke-UNC skirmish was not about cool. It was not an excuse for much of anything. It wasn’t even in the name of a rivalry that was so one-sided this year that it was more like light hazing than a couple of basketball games.

It was a kid — a kid in the truest sense, a 21-year-old one — who took a shot to the nose and wasn’t afraid of it. And, because of it, Tyler Hansbrough showed that this North Carolina team isn’t too young for these sort of games.

This shouldn’t make any sense, really. In hoops, the ones who fight are the headcases whose shot selection is just as big of an issue on-court as it is at-nightclub. Or it’s the young kids, slightly less talented than the rest, with something to prove to the other team and an allegiance to build with benchmates at practice.

This, as discovered by Dr. Isiah Thomas MD, is known as Don’tgointhepaint Syndrome. Hansbrough does not have this. If the UNC sophomore did anything medically-related to the Tar Heels with 14 seconds left on Sunday afternoon, other than wipe away the flowing blood off of his lips, then he took this UNC team off of life support.

After a game where the 6-9 forward got anything he wanted in the paint — with 17 rebounds, that includes on the Blue Devils’ paint — there was still no definite kick into an ACC tournament that will undoubtedly be the most talent-laden and hotly contested in the country. Despite his 26 points, Hansborough’s Tar Heels simply looked more polished than Duke as basketball players, but not any more focused as a team.

Focus and toughness, anyway, had been the problem in the last two games. An 84-77 loss to Georgia Tech where they were outright outmuscled by Ra’Sean Dickey and Thaddeus Young. Before that, another conference loss, 89-87, to a Maryland team full of guards who beat them to loose balls and fought for boards.

For this UNC team, an amalgam of unbelievably talented and just-as unbelievably young underclassmen, this looked to be an inevitable wall. This team without a junior or senior rotation player was on pace to go one-and-done in the field of 64 for the second straight year.

“This is very frustrating,” Hansbrough told the AP after the loss to Maryland. “We have to be tough.”

And with a Gerald Henderson elbow to his face, this veritable old guardsman of a sophomore didn’t look overzealous or foolish when he fought off both tears and a crowd of people in front of him in an effort to show some grit. He didn’t even look young.

He looked like he cared. He looked like a leader. And, for the first time this season, he made it look like this North Carolina basketball team is tough enough and mature enough to match its talent and make a real run at a National Championship.