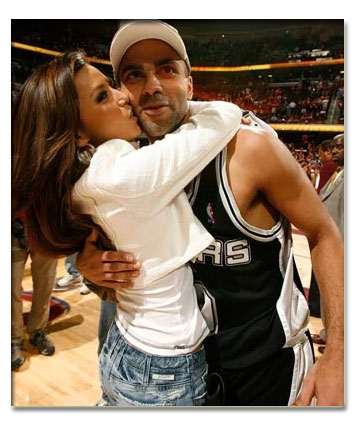 NBA PLAYOFFS/CONFERENCE SEMI-FINAL DEEP THOUGHTS…Where do I begin? I have a GANG of trash to talk about the last round, but to neaten this thing up, I’ll just mix it in with my second round predictions. I’ve cheated a lil bit (meaning these series’ are a few games deep), so I got a taste of what’s to come. But this is the NBA and anything can happen. Let’s go…

Thus far, the Lakers are the only team that have shown me that they mean business in the playoffs. I knew they would mollywop the Nuggets, but that first round brooming was sickening. The Nuggets are just nauseating. If my Warriors had grabbed the 8th seed in the West like I’d hoped, the Lakers would’ve still won but at least they would’ve been entertainingly run out of the gym for 2 games. Even the Blazers or the Kings would have put up more of a fight. No disrespect to Iverson, Najerra, Smith and Camby, but the Nuggets personify the NBA I’ve grown to hate. Ok, he obviously has some talent and stats, but Carmelo Anthony (with Dirk Nowitzki as his plus 1 guest) are the most overrated soft serve players in NBA today. Damn near 7 foot wing/forwards that fantasize about being 2 guards. They live for floating softly to the 85 foot jumper, giving into defeat before a series is done and letting their hair flap in the wind while sightseeing on defense. They are the Kenny G’s of the NBA. Fuck numbers. It’s easy to have numbers when you’re one of the only go to guys on a team in a conference where only 3 or 4 teams play defense. But anyway, regardless of how undermatched or soft the comp, you seek to embarrass and steamroll everybody come playoff time. Fuck a game 6 and 7 in the first round unless it’s the 3-6 or 4-5 matchup.

The Jazz won’t be quite as easy for the Lakers to dispose of, but they don’t stand much of a chance either. A Jazz hater since the Stockton-Malone pick n roll days, I gotta tip my hat. This team is tough and on the come-up. Being that Carlos Boozer hasn’t shown much, look for Mehmet Okur to step it up. He’s a big reason why T-Mac crawled off in a pool of tears last year. Speaking of which, I’ll lay off of T-Mac’s 7th first round exit because this time he really had minimal help, but he’s still another wing with 2 guard dreams. I hear Kobe got the MVP. In my eyes it was always between him and Chris Paul, and despite how valuable KG and LeBron are, neither was ever even close. Honestly, I felt Chris Paul deserved the MVP, but oh Well, there’s no denying Kobe is the best there is. The named MVP + a stacked Staple Center squad= Lakers in 5.

OK, OK. Yea, maybe I was reaching with the Sixers in 7 call against the Pistons in the first round. But I was trying to make a point. We all know what the Pistons can do (same goes for the Celtics, more on that debacle later), but they pick and choose when to do it. That’s dangerous come playoff time, just look at the meltdowns the previous few seasons. They love to play roulette and have a shitty untrustworthy coach to boot. Point blank, they’re a good team that makes me nervous. You never know if you’re gonna get the 04 Pistons or the 07 Pistons. The Magic boast a beast of a big man (Howard), an underrated killer power forward (Turkoglu), a super-scorer (Lewis) and some decent guards (Nelson and the underrated Keyon Dooling). If Billups can get back to health, the Pistons win the guard matchup, but Dwight Howard will prompt Joe Dumars to call Bill Lambeer for a 10 day contract. There’s no stoppin that man right there. Hamilton & Lewis. Prince & Turkoglu. That makes Sheed the X-Factor for the Pistons. He brings it Simon Gratz style, Pistons take it. But as entertaining as his tirades are, if he does that without delivering the goods, we may see an all new Piston team next year because they’re on the trout route come late May. I’m hoping the Magic can win this one to be honest. I’m kinda tired of Detroit being at the top of the East and then mailing it in. That Billups “buzzer beater” shouldn’t have counted and it fucked the Magic out of possibly winning Game 2. But if the Magic can do 3 things, they can win this one in 6 or 7 games.

1. Run!
2. Win game 4 at home on Saturday
3. Run!
If the Pistons stay alert and half court the Magic to death, its all them. I know I said the Pistons wouldn’t make it this far, but oh well. This IS the East we’re talking about. This one can go either eay, making it “The Zone Series to Watch” (New!). I always go against the grain and it’s time for some new blood, so I say Magic in 7.

Chris Paul got slighted on the MVP vote, but we all know who the best point guard in the NBA is. CP3 made The Mavs look like CB4. Fraudulent and lo-cash. Speaking of the Mavs, goodbye and good riddance. Poor Jason Kidd woulda been better off an NJ Net (or even an NJ Devil at this point). Avery Johnson should have never been fired, but he deserves to coach some players that aren’t so Cottonelle. He’s better off leaving Dallas. With all that silky soft play and finesse, I don’t know if I’m watching a Mavs game or a Pantene commercial. The trade was moot. Mark Cuban is a poop-butt. Avery wasn’t the problem, fire the players. Stackhouse is getting older, Josh Howard came up short and played himself with the Half Baked interview -come July I’m sure even Dick Bavetta is at the dank spot coppin some getrite, no need to repeat it- and Dirk…I’m really trying to remain diplomatic and refrain from one of my trademark Dirk Pinyata Bashing Soliloquies. I was gonna explore David West slappin Ol Mr. Sof-tee on the mug, but I just can’t do that subject any more justice than my man Michael Cooper. Peep the link, I have nothing more to add…

And speakin of a peeeeiiimmmp slap, will somebody on the Hornets please put Manu Ginobili on his ass? Take the flagrant one and send a message for God sakes. As much as the Spurs personify an NBA snoozefest year in and out, Duncan is gonna get his and they’re difficult to stop. They just pound you. The only way to beat em is to stop the other dudes (Parker and Ginobili) . The Suns failed at that and Coach D’Antoni may take over in Cabrini-Land now (damn, I like Chicago as a city, shame they’ll never win anything now). Both both the Kidd and Shaq trades were busts. With Parker and Ginobili doing the Macarena in the paint all day, you’d think non-coachin D’Antoni would employ some type of zone defense and get Amare and Shaq’s dinosaur ass in the paint and steamroll somebody. You try to contain Duncan the best you can and make the other dudes beat you from outside. See if those little guards can consistently nail a three or make Bruce Bowen stay in the corner and beat you there. Nope. The Suns were ovulating in the first round. Fortunately, the Hornets play defense (a 5 point Game 1 from Duncan) and with them being up 2-0 at the time I write this, could we see the leagues most boring team out in the second round? I think so, but the defending champs aren’t goin out without a scrap. Hornets in 6.

Oh well, I guess all the Wizards trash talk was moot and I lost some points with my Wizards in 7 call. I’m not making excuses, but they’re always hobbled when they face the Cavs. LeBron is a beast, but honestly I still give the Wizards credit for puttin LeBron on his ass at every turn. LeBron is the man but he’s damn Kimbo Slice compared to others his height and age, he can take that punishment. At 6’8 and a chisled 260, that Iverson sympathy after a playoff beating has no place. No need to cry about abuse LeBron, word to Brendan Haywood. If this was 1990, you’d have to worry about way more than Deshawn Stevenson going at your dome. Consider yourself lucky Mr. James. With that said, the Cavs are an enigma to me. Besides Joe Smith’s vet status and an occasional Ilgauskas/West/Gibson sighting, I don’t see much on that team to help LeBron. Maybe I’m sleeping, but Washington’s health and Detroit’s 2007 Spring nap contribute greatly to the Cavs playoff record over the last 2 seasons. Well, this series with the Celtics is where the buck stops, but not without a few questions.

Its safe to say that I wasn’t alone in predicting a Celtic sweep of the Hawks in the first round. Celtics in 5 would also be accurate, as this is the NBA, it’s hard to beat anybody 4 straight games. But I think maybe 50 people in America (all with 404 area codes) would have predicted a seven game series. The Hawks are a good young team with a legit star and a promising rookie (Johnson and Horford). But the Celtics are loaded and dominant and should be damn ashamed of themselves for letting that series go that long. Had they not closed Game 7, Danny Ainge and Doc Rivers would both be on Storrow Drive lookin like Ozone & Turbo, stopping cars and breakdancing for dashboard change. And as much as I want Ray Ray and KG to get rings, I was reeeeeeeaaaaalllly hoping the Hawks would pull that off. The Celts are a machine, but they’re in trouble. The Cavs aren’t better than the Hawks overall (fuck it, in my opinion the Hawks are a better team), so they won’t stop the Celtics. It’s safe to say the Celts have woken up, but that first round a) drained em and b) proved to the Magic, Pistons and Cavs that this team is beatable. And if they keep fuckin around…oops! Celtics in 5…but then the real problems start and heads will roll.