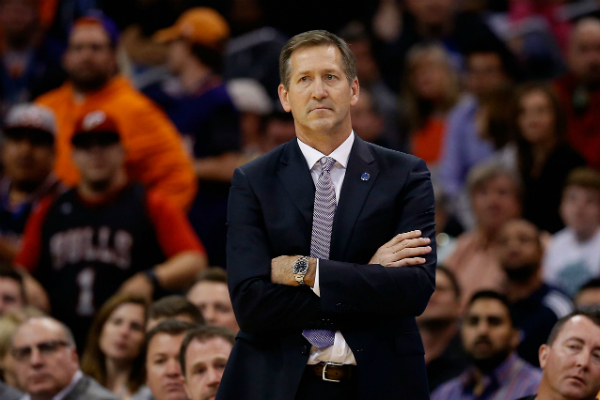 The Knicks reportedly will hire Jeff Hornacek to be the franchise’s next head coach.

The popular opinion was that Knicks president Phil Jackson would promote interim coach Kurt Rambis to the head position due to his relationship with Jackson and familiarity with the Triangle Offense.

In April, Carmelo Anthony said he “wanted input” during the Knicks coaching search. After that, New York was in contact with former Cavs coach David Blatt, former Pacers coach Frank Vogel and current Lakers coach Luke Walton about the job.

On Hornacek-Knicks: It's "as close as humanly possible," per source, tho not official. Deal is expected soon, barring any unforeseen snags.

But the New York Daily News‘ Frank Isola says the deal is not done yet:

FYI: A source close to Jeff Hornacek says talks still on-going. No deal as of yet. "Not sure why all these reports out there," source said.

It appears that Phil Jackson has decided on Jeff Hornacek but as of now the two sides do not have a contract in place.