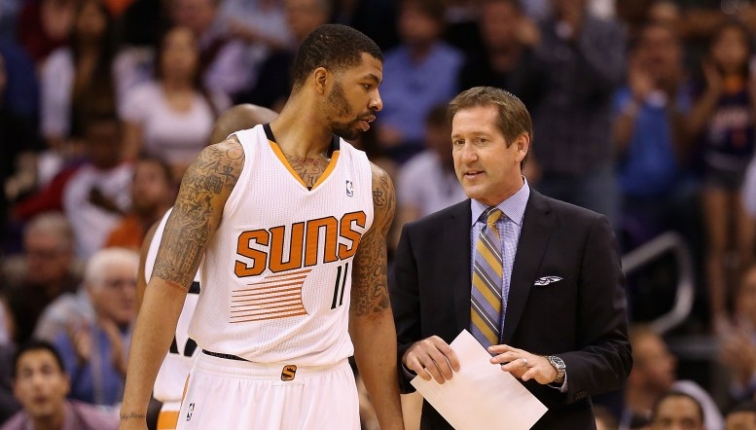 Phoenix Suns head coach Jeff Hornacek tried to remain as diplomatic as possible when asked for his thoughts on L’Affaire Markieff Morris.

Hornacek, speaking from a team event to promote its new uniforms, said that things will work themselves out with the disgruntled forward once training camp gets underway.

Morris’ public demand of a trade has resulted in a $10K fine from the NBA.

Missing from the affair was forward Markieff Morris, the longest-tenured player on the roster. […] His absence was expected, and to be fair, his appearance was not scheduled.

Morris has kept largely to himself, shunning most in the organization ever since twin brother Marcus was traded to Detroit in July, a fact head coach Jeff Hornacek alluded to during his remarks to the evening’s invited guests at The Canyon Suites at The Phoenician. […] “Now we have one little thing we got to take care of, hopefully,” he said, smiling.

“Hopefully he can get here and we can all talk to him. I think once he gets here with the players — and maybe the players can help out in that regard — and realize that, probably like anything else, it happens when you might not be happy with the organization, but you’re a professional, you go out there and you play as hard as you can,” Hornacek said. […] “Really, when you get out there and start playing games, you’re not playing for the organization, you’re probably not even playing for your coaches, you’re playing for yourself and your teammates because that’s the bond that those guys have as players, so once he gets playing with these guys I think he’ll be okay.”