Jermaine O’Neal: ‘It’s Hard to Explain the Chemistry That We Have’ 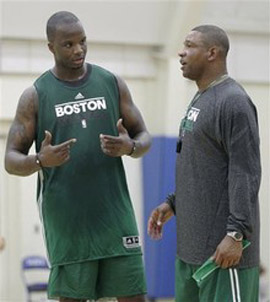 Jermaine O’Neal’s only played three preseason games with the Boston Celtics yet he’s already at a loss for words to describe his new team.

“It’s hard to explain the chemistry that we have,” the veteran forward told Russ Bengtson before last night’s game against the New York Knicks. “I always try to picture words to express the feeling that I have about being here. You know, obviously the rich tradition of championships and all the guys that’ve played in this uniform. It’s definitely an honor and a pleasure to be involved in something like this.”

Asked if this team reminds him of any other that he’s played on, O’Neal, who’s played for four previous franchises, said it does.

“It feels like Portland my first couple of years,” replied the former All-Star, “with Sheed and Brian Grant and all those guys. It was so intense—Cliff Robinson, Sabonis. Every practice was just like, OK, let’s see can I get this off. Most teams you’re on you’re gonna dominate the guy that’s backing you up or the guy that you share time with. But here it’s like, OK, let me get stretched. Let me make sure I’m ready to go when Doc says let’s go.”

O’Neal’s had a quiet preseason (2.7 ppg, 5.3 rpg, 2.3 bpg), but he attributes that to his being the new kid on the block coupled with a training camp injury.

“As a new player, you don’t want to come in and mess anything up,” JO said. “It’s still a work in progress. I ended up missing a week of practice caused I tweaked a hamstring the last day of training camp. So right now I’m catching up, and those guys—Kevin, Ray, Paul—have done a great job just talking to me. They must’ve put in like 20 sets in the week [that I missed]. So I’m trying to learn on the run.”

It’s still early in the year—heck, the regular season hasn’t even started yet—but Jermaine’s more excited for this campaign than he’s ever been.

“Everything that I’ve pictured it would be, it’s been that way. But it’s been probably five times better,” said O’Neal. “You look at the point in my career where the chapter’s coming to a close, and if I had to pick a group of guys to close it with, this is it right here.”