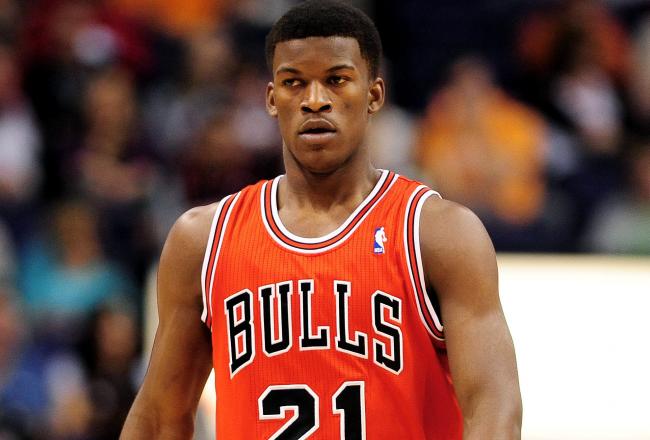 It’s hard to know who to believe when it comes to Jimmy Butler’s sprained left thumb – Butler, his head coach Tom Thibodeau, or the Chicago Bulls’ PR staff.

Butler told the media that he’d miss the season opener tonight in New York against the Knicks, Thibs added that he’d sit out 2-4 weeks (or is it 1-3 weeks?), and the team added an even more confounding timetable.

A confusing shootaround at Madison Square Garden started with Jimmy Butler glumly saying he’d miss Wednesday night’s season opener versus the Knicks because of his sprained left thumb, but adding that he hoped he’d be ready for Friday’s home opener against LeBron James and the Cavaliers.

It continued with coach Tom Thibodeau declaring Butler, who previously had been called day-to-day, out for two to four weeks. Thibodeau later dropped that estimate to one to three weeks. And a team public relations official said the timetable starts from when Butler first sprained the thumb on Oct. 19. […] “No one knows, that’s the thing,” Thibodeau said of Butler’s absence. “Two to four (weeks), one to three, I don’t know what it is. He’s not comfortable going yet, so when he is, he will. We know that he wants to be out there, and injuries are a part of the game. Just deal with it.”

“I’m still taping it but there’s just a lot of pain in the joint and the muscle around it,” Butler said. “I just don’t want to make it worse right now. I try to come back early and that’s not always the best thing to do. They’re just making sure when I do come back, I won’t have any restraints and be able to go 100 percent.”

Gar Forman just said Butler's injury will have no impact on contract negotiations and he met this morning with Butler's agent. @KapandHaugh