Joe Johnson Out to Get Rid of ‘Iso-Joe’ Label 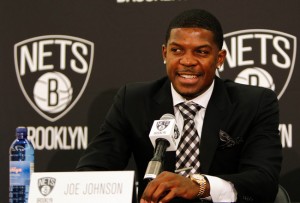 Joe Johnson infamously became “Iso-Joe” in Atlanta, and he can’t wait to shed the tag as a Brooklyn Net. Deron Williams will ensure that Johnson won’t be stuck taking his man one-on-one while his teammates look on. Per the NY Times: “I don’t know where the Iso-Joe comes from,’ said Joe Johnson, sounding more bemused than annoyed. For most of his seven seasons as an Atlanta Hawk, Johnson was a reluctant solo artist, powering Coach Mike Woodson’s isolation-heavy offense while teammates stood and watched. The Hawks won a lot of games and Johnson scored a lot of points — until the playoffs, when the simplistic style faltered, leaving Johnson as the scapegoat. ‘It was cool, until I started getting double- and triple-teamed,’ Johnson said. This was an observation, not a complaint. Like any star, Johnson relished the chance to shine, even if he never viewed himself in such one-dimensional terms. As a scorer? Yes. As an iso-machine? No. The definitions and distinctions matter now that Johnson is in Brooklyn, as half of an All-Star backcourt that is expected to lead the Nets back to the playoffs. The Nets already have a do-everything point guard, Deron Williams, who can shoot, pass, drive and post up with the best of them. Johnson can also do it all — and for the last seven years has — which prompted obvious questions about compatibility and chemistry. […] ‘When I started in Phoenix, there wasn’t no Iso-Joe,’ Johnson said. ‘I basically played off of Amar’e and Steve Nash and Shawn and those guys. This is a similar situation for me here in Brooklyn.’ Indeed, just 14.9 percent of Johnson’s possessions in 2004-5 were defined as isolation plays, according to Synergy Sports, which logs every N.B.A. play. The majority of Johnson’s scoring chances came as the ballhandler in the pick and roll (22.1 percent), on spot-up jumpers (20.3) and in transition (18.8). It was not until Johnson joined the Hawks — who made him their franchise cornerstone with a five-year, $70 million deal in 2005 — that he became an unabashed ball dominator. Johnson’s isolation play leapt to 19.1 percent of his total offense in 2005-6 and to 31.5 in 2008-9. By 2009-10, it was 36.8 — 5 points higher than LeBron James and just slightly behind Carmelo Anthony. Johnson’s isolation play dipped to 26.9 percent in 2010-11, after Woodson was fired. But by then, Iso-Joe had become a permanent part of the N.B.A. lexicon. It was not intended as a compliment. […] He is not exactly Broadway Joe. But he is no Iso-Joe, either. The nickname needs an update. Movement Joe? No-iso Joe? Spot-up Joe? The soft-spoken fellow from Little Rock smiled broadly, as if to say: That would be just fine. ‘Yeah,’ Johnson said, chuckling. ‘Spot-up Joe.'”