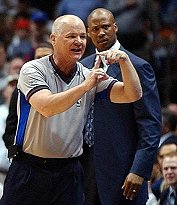 A long time ago, way back in the beginning of what has been an inexplicably long NBA career, Joey Crawford took anger management classes. Apparently he needs to re-enroll.

As linked to by my esteemed colleague Mr. Mutoni, Joey was indefinitely suspended by the League today following his UTEP two-step toss of Tim Duncan during Sunday’s Mavericks/Spurs tilt. This was just Joey being Joey, of course—overreacting to a player’s reaction, putting himself above the game. Essentially doing exactly what a referee should NEVER do. I’d be hard-pressed to name more than five officials/umpires/referees in ALL professional sports, and the ones that I CAN name, well, it’s not because they’re great. A truly great ref should work entirely below the radar, and not, say, have segments done on them on HBO Real Sports. Or have features written on them in national newspapers or, well, here. Especially ones that have parts like this:

Remember that big flap in Dallas last season [2003]? When he tossed Coach Don Nelson, and then threw Assistant Coach Del Harris a quarter later? It was all over the papers at the time. Joe Crawford says it’s the one call, actually series of calls, he wishes he could have back.

“It caused me a little problem,” says Crawford. “(Nelson) walked up to halfcourt during a timeout and just stood there. I hit him with a ‘T.’ The anger management was kicking in and I just stood there, said in a low voice, ‘Go back to the bench.’ He said he wasn’t going back. I hit him with another ‘T’ and ejected him. When I look back on that, I thought (Nelson) was screwing the game up for me and my partners, and he was trying to intimidate my profession, and that’s what I ejected him for. But it’s not all about my profession. It’s about the game. The more I’m around this, the more I’m figuring this out that it’s just not about the officials, us in our little world.”

Really? He’s figuring that out? Could have fooled me. How about that game in Chicago last month between the Bulls and Pistons, where he double-teched Tyrus Thomas and Richard Hamilton (and eventually tossed them both), and mixed it up with Bulls coach Scott Skiles in between?

“What are we doing?” Bulls coach Scott Skiles asked during a delay.

“Don’t tell me what to do!” Crawford replied.

Crawford has always taken things personally, always injected himself into the game. He’s the only ref I’ve ever seen throw out a FAN—one who was harassing him in New Jersey. As an official don’t you have to be above that?

And this has been going on for YEARS. A quick Google search of “Crawford technical foul” reveals plenty of stories. Like this one, from 1999:

And, there have been classic moments of frustration, like when Reggie Miller was ejected from the Miami game by referee Joey Crawford with just under 2 minutes remaining after applauding a call that had gone in favor of the Pacers. Less than a minute earlier, Miller had been hit with a technical for disputing a foul call against him. Then, when Miami’s Alonzo Mourning was whistled for a foul, Miller earned his walking papers by sarcastically clapping in Crawford’s face.

OK, maybe Reggie deserved that one. But what about the 2003 playoff series between the Bucks and Nets, when the Bucks were hit with 15 techs in five games, including ones handed out to such notorious hotheads as Ervin Johnson and Michael Redd?

“It’s ridiculous,” Sam Cassell said. “I asked Joey Crawford, is this what they want to see? As a fan I wouldn’t want to see 14 technical fouls.”

Or then there’s my personal favorite, from 2005:

Mutombo was whistled for a technical late in the third quarter after complaining about a foul on O’Neal. After the call, Mutombo held up both arms in disbelief and the Rockets’ bench and fans exploded in protest. “He was mocking me with his smile,” official Joe Crawford explained to incredulous Houston coach Jeff Van Gundy.

That’s not a case of an official putting himself above the game? Apparently not, as Crawford blissfully continued along his merry way, tossing people whenever he saw fit. Regular season, playoffs, pre-season. It didn’t matter. And then the League tightened up the rules—or the interpretation thereof—before the start of this season, things just got worse.

Referee Joey Crawford was worked up for a preseason game. He gave Rambis a technical foul at the end of the first half and barked at the Lakers huddle to get on the floor for the start of the second half. Remember that it’s Oct. 15.

Sure enough, Parker was whistled for an offensive foul 40 seconds into the third quarter, shot a look that said he was upset at the call, and was hit with a technical immediately. I guess that’s what the NBA wants this season

Nothing has changed. Joey Crawford has been doing this for his ENTIRE CAREER, with no consequences. He continually responds to situations where he THINKS someone is showing him up by SHOWING THEM UP RIGHT BACK. Which makes no sense whatsoever. After all, it’s safe to assume that more people went to the Dallas game on Sunday to see Tim Duncan than they did to see Joey Crawford. But that’s not the way he thinks.

I’m not asking for him to be fired. It doesn’t appear that would happen anyway. And after so many years of service, I’d rather see Joey look back at his pattern of abuse and just walk away. Retire. It’s too bad, because he undoubtedly loves the game. But it’s about time he stopped hurting the one he loves.