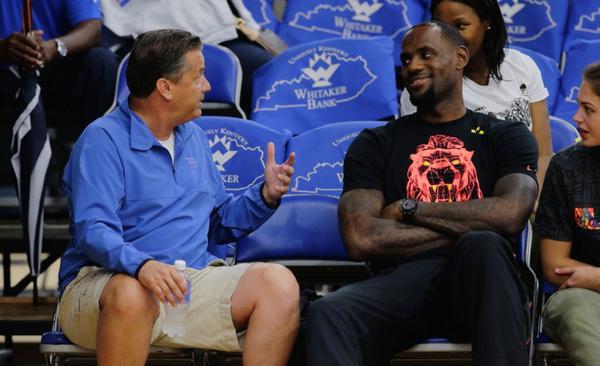 By now, it’s common knowledge that the Cleveland Cavaliers put on a full-court press in an attempt to lure John Calipari away from Kentucky last offseason. The Cavs reportedly offered a seven-year, $60 million contract to the Wildcats’ coach, hoping that he would accept a position as the team’s coach and president. Of course, Calipari turned that down and led the Wildcats to the Final Four, while the Cavaliers hired David Blatt, who has since led them to the NBA Finals.

Still, people have asked Cal if he regrets his decision to stay in the college ranks, and while he’s said no, he was recently asked again now that Cleveland is four wins away from its first NBA title in franchise history. Despite this, Cal didn’t change his answer.

Last spring, John Calipari had a chance to become the head coach of the Cleveland Cavaliers. Speculation on NBA jobs is an annual occurrence for the Kentucky coach but this was different.

“The only thing that was ever serious was the Cleveland thing,” Calipari said Monday here outside Detroit at the “Coaches Beat Cancer” event, run by Oakland University coach Greg Kampe.

While there was no guarantee, there was, at the time, a possibility that LeBron James would return to the franchise, offering the chance to coach one of the greatest players of all time for an instant title contender. Opportunities like that just don’t present themselves very often.

Cal, of course, said no to Cleveland. LeBron said yes. The Cavs open the NBA Finals on Thursday at Golden State.

So any regrets? Any pangs of wistfulness? After all, wishing you could do two things at once, run in dual tracts, doesn’t denigrate the path chosen. Every coach would like to win an NBA title.

“No,” Calipari said. “No, nope. Because what happened, and the reason I did what I did, was based on having guys come back who wanted to be coached. I didn’t feel comfortable not being at Kentucky.”