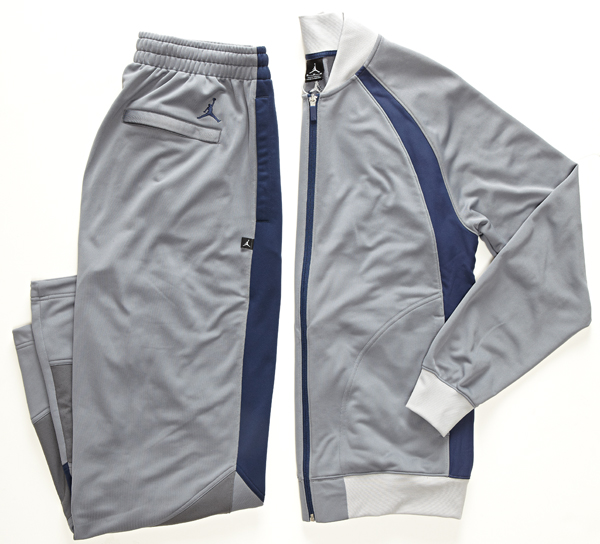 You know the Jumpman, right? No, like, the Jumpman. That iconic logo of Mike that adorns all the Jordan gear you own. Well, most of it. See, back in 1985, MJ’s first year with Nike, the young Bull was photographed dunking over the Chicago skyline. It’s that photograph that became the Jumpman silhouette you see today. On MJ’s feet were the now-legendary Air Jordan Is. But you already knew that.

What you probably didn’t know is that on his body was the Nike “Muscle Pant,” part of Nike’s original “muscle” line—a line of breathable mesh fabric designs that included pants, tights, short and jacket. It’s the apparel MJ was most known for wearing off-court and in TV spots. And since the Air Jordan 1 is making a comeback, it’s only right the Muscle Jacket, Pant and Short would be hitting retail again, too.

That’s right—come March Madness 2013, Jordan Brand is taking you to flight school. Again. The updated Air Jordan I Muscle Jacket, Pant and Short dive back into the Jumpman archives to bring modern fit and construction to a classic look.

“Jordan has the great legacy of Michael Jordan from the beginning in 1985 and trying to position ourselves as the brand of flight. We can look back at these historic and archive pieces as our origins of flight. But the new product brings us into today’s technology, function and making the athlete better with the future of flight,” says Greg Schroeder, Jordan Global Apparel Product Director. “It’s a nice position to have that brings to life the legacy of the brand.”

The brief predecessor to the Jumpman was the “Wings” logo, which only appeared on the first two Air Jordan sneakers. Now, the Wings logo is back as the icon for the muscly March Madness gear, in bold colorways for Jordan’s four colleges: UNC, Georgetown (pictured above), Marquette and Cal. And though you won’t see these pieces anywhere on the court, they’ll be hard to miss off it, with distinct, bold design lines.