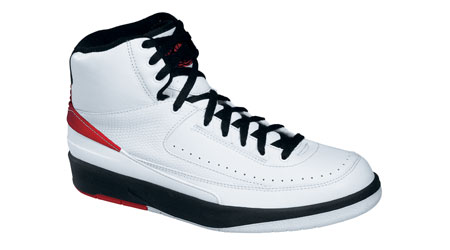 The Air Jordan II represented a progression from the Air Jordan I in the same way that the Lamborghini Murcielago represents a progression from the Volkswagen Beetle. Made in Italy of polyurethane and lizard-embossed leather, the Air Jordan II was infinitely sleeker and lighter than its instantly obsolete predecessor. The Air Jordan ball-and-wings logo moved from the ankle to the tongue, and the Nike Swoosh moved off the shoe completely. It was such a departure that Sports Illustrated even did a sidebar on it (headlined, if I remember correctly, “Leapin Lizards”).
It was also more expensive, retailing for $100—almost double the original Jordans’ $65 price tag. But it was worth it. There was the Italian construction, for one thing, and the sleek, exotic look, which went equally well with shorts or dress pants. And then there was Jordan himself, who won his first Slam Dunk title in a pair of white, black and red hightops.
It would get better.