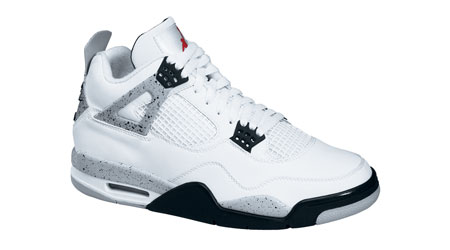 It was hard to see the III go. But as the Air Jordan division continued to grow, it became apparent that a new shoe (along with a new Spike Lee commercial) would be dropping every year.
The IV wasn’t all that exciting from a design perspective. In essence, it was just a more complex version of the III, sharing its predecessor’s mid-cut silhouette and Visible Air cushioning, and adding plastic wings and mesh inserts and complex fan-shaped lace loops. The elephant print of the III was replaced by a spatter-finish plastic. Very ’80s.
But what the IV is known for best is what it did on the court. They called it “The Shot.” It happened in Cleveland, in the playoffs, in the waning moments of Game 5, the Bulls trailing. Jordan caught the ball at the top of the key, elevated over Cavaliers defender Craig Ehlo and buried the game-winner at the buzzer. The Bulls moved on.
And the IVs found immortality.