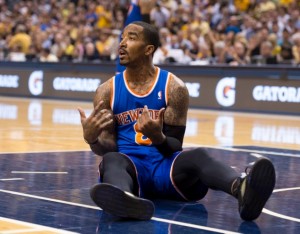 During a tumultuous 10-year career, New York Knicks guard JR Smith has connected on just 42.5 percent of his field goal attempts, while averaging 13.4 points a night. Not exactly Hall of Fame numbers.

In response to his legion of haters, though, Smith (using a special mix of mystery math and delusional self-confidence) claims that he’s one of the best shooters the game has ever seen. Per Smith’s Instagram account: