Julius Randle ‘Absolutely’ Expects to Average a Double-Double This Season 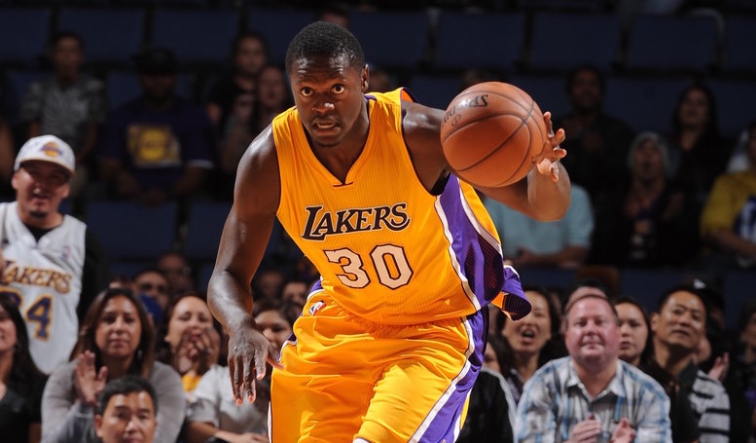 Coming off a rookie campaign that lasted just thirteen minutes before he broke his right leg, Julius Randle still expects big things from himself this season.

Randle, 20, has been working out with potential future teammate Metta World Peace—and holding his own—and says he anticipates putting up double figures in points and rebounds in 2015-16.

The big fella says that he suffered a bone bruise on the same leg he fractured during training camp by bumping into a bed post.

“That’s when I really lost it,” said Los Angeles Lakers head athletic trainer Gary Vitti, who has overseen the Lakers miss a combined 827 games because of injuries the past three seasons. […] “I felt that it was my fault. Everyone has told me it wasn’t my fault. But I have carried that for a while.”

Vitti ranked Randle’s injury as his second-most devastating experience entering his 32nd and final season with the Lakers, the incident paling only to when Magic Johnson announced in 1991 he had tested positive for HIV. […] “It wasn’t GV’s fault at all,” said Randle, who also absolved blame on the rest of the Lakers’ trainers. “He wished he could have done more. But there’s nothing else he could have done … I felt bad. I wondered if there’s something else I could have done to warn him. But it was nobody’s fault.”

Randle does not face any workload restrictions when training camp starts Sept. 29 in Hawaii. Yet, the Lakers plan to proceed with caution if any setbacks emerge. […] Lakers coach Byron Scott may also favor starting veteran Brandon Bass at power forward. Though Randle “absolutely” sees himself averaging a double-double, Randle maintained, “I’m just going to do what’s best for the team and whatever I can do to help the team win.”