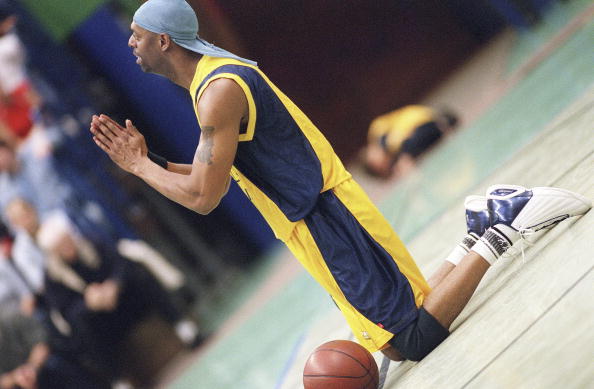 Coming out of California in the late ’80s, he had size, and the athletic ability to jump out of the gym—hence the moniker, “Jumping Joe.” The San Francisco native had all the God-given talent he needed, but often times that isn’t enough. Getting to the NBA requires more than natural ability. Jumping Joe knows. He is a testament to the fact that hops, handle and a vicious game doesn’t translate to NBA success, it takes more than that. Jumping Joe had his chances and blew them.

And he is the first to admit that.

“I played in college at Pepperdine,” Joe tells SLAM. “But after I got caught stealing in the dorm rooms on campus, on some wanna-be gangsta shit, I was in Coach [Jim] Harrick’s permanent dog house and they shipped me out.”

“I played high school ball at Washington. I was All-State, Honorable Mention All-American and I played very well against the best players in the country at a big Summer Tournament in Vegas. We won a State Championship with the German legend, Chris Welp, who played in the NBA with the 76ers and Warriors. I was All-Tournament and got a few votes for MVP, but my 7-foot center took home the trophy.”

After a stellar high school career, the future looked bright. But Joe failed to make his mark at Pepperdine and then went the JuCo route, at San Francisco City College (where his team was runner-up California JuCo Champion) and later San Francisco State. But when he became draft eligible in 1989, no one selected him.

“I was one of those dudes who never took college serious,” Joe says. “I viewed college ball as a springboard to the NBA, like many other dudes who were only dreaming. I was a good role player with a tireless motor, that energy dude every team needs. I was a great rebounder and shot blocker, but my addiction was to dunk on people. It was when crack hit the bay area in the ’80s and ’90s, so addiction was normal. I just thank God I was addicted to weed, forty ounce beers and dunks.”

And Jumping Joe has made a career out of dunking on people, despite never making it to the League. He followed another route, call it the path less taken, but a path nonetheless that many American ball players have ended up on. Joe had pedigree and respect from pros and future pros, which gave him instant credibility abroad.

“My dream was always to play pro basketball,” Joe says. “The San Francisco Pro-Am saved my life. Playing against guys like Jason Kidd, Gary Payton, my man Brain Shaw and being on the same team with streetball legend Hook Mitchell gave me the feeling like I was a pro. But them dudes had mad game, I was just the dude with bounce who dunked on plenty of people and laughed a lot.”

Jumping Joe didn’t take his ability serious enough, and it almost slipped through his fingers as he began gravitating toward the streets.

“I was a weed head and caught up with the hustle of the ’90s,” Joe recalls. “My love of guns and pretending to be a gangster had me headed on a one-way street to death or jail. Dudes were making major paper in the crack trade, so I wanted a piece of the pie like everybody else. The problem was I was a well-known cat from hoops. Everybody knew me as the clown ass dude with hops, so they didn’t take my gangster serious. So I went and got that first and fifteenth money.”

But eventually Joe tired of the grind of having a “real job” and went back to his first love, playing ball. Denied the chance to play in the NBA, he headed to Europe.

“I left to play basketball for the first time overseas in 1991,” Joe says. “I came overseas because my life was spiraling out of control. My college roommate Eric White played in the NBA for the Clippers. He is a true homie and he inspired me to never let my dream go.”

Getting paid to play was what it was about for Joe, who went on to play in Japan and Luxembourg—where he finished his career in 2002, “where I put up 30 points per game.”

But playing overseas isn’t all its cracked up to be, says Joe.

“My experience with professional basketball in Europe is this: Basketball overseas isn’t for everybody. There is a language barrier. You will not be understood when you have personal problems, especially if you’re from the hood. You will be homesick. If you can leave loved ones and your culture behind for your hoop dream, then you can make it work like I did. Expect not to be paid on time. Expect to encounter snakes and people who want to take advantage of Americans everywhere. If you can deal with all of that, you can make your hoop dream a reality.”

Jumping Joe has. And he has found life overseas after his playing career was over, as a coach who puts on clinics for the kids.

“I started up a program to warn kids about the bullshit I was doing and it worked out,” Joe says. “My mission now is to warn young dudes who want to come and play overseas what this really is out here and I hope they listen to me and then make a decision on what’s best for them and their family. I’m a talent scout now for a company in Germany. So I’m looking to help guys live out their hoop dream, like I did.”

And Jumping Joe has found another sideline to keep his career in hoops going. He still has amazing hops even at 50 years old, and proves it with the YouTube videos showing all the amazing dunks he does to wow the kids and players at the camps and clinics he holds in Germany.

He’s also started a series of video blogs, like this one:

“My videos online are for only one purpose,” Joe says. “To prove to anybody that ever hated on me, coaches and other haters, that I can ball and I can follow my hoop dream even if it takes me to the moon.”

Jumping Joe has had an amazing and eventful journey. What it takes him next, we don’t know. But one thing is for sure: it’s far from over.

Seth Ferranti writes for VICE, Don Diva and The Fix. Support his new Supreme Team comic, order his books on Gorilla Convict and follow him on Twitter @sethferranti.