Kawhi Leonard: ‘I’m Pretty Sure I’ll Be in a Spurs Jersey for My Whole Life’ 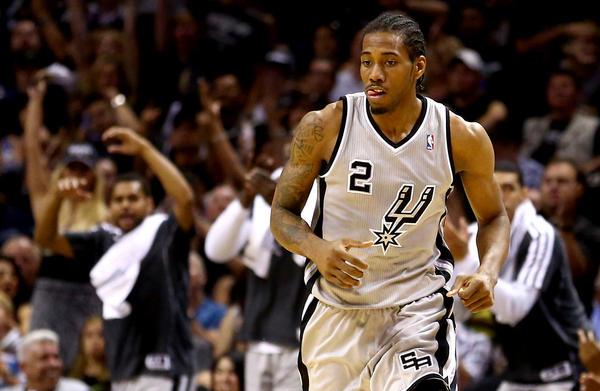 An agreement on a contract extension couldn’t be reached between Kawhi Leonard and the San Antonio Spurs, but neither side appears to be particularly concerned.

The Spurs are relying on their young stud more and more, and Kawhi isn’t planning on going anywhere … well, ever.

The 2014 NBA Finals MVP expects to ink a long-term deal with his team next summer as a restricted free agent.

“We ran more plays for him tonight than I ever have in his career,” Spurs head coach Gregg Popovich said Monday night. “That’s the plan. We’ve got to start giving him the ball. You know, he’s the future. I don’t think Timmy (Duncan) and Manu (Ginobili) are going to play any more than maybe six or seven more years. So we’ve got to let somebody else do something.”

“I was never upset about (the extension),” Leonard said. “I mean they explained to me what their deal is and why they didn’t do it yet. That’ll play out. I’m just here to play basketball and have fun and try to win another championship. If I think about that, then I’m not going to be the same player that I am and will be just out of it. […] I can’t be impatient. It would show on the floor, and I won’t compete if I’m thinking about getting the ball. I’m just going out there to do my role, the same role — defense first and then see how the ball turns out on the offensive end.”

“I don’t think I’m going anywhere,” Leonard said. “I mean they love me here. I like the organization, and if it was up to me, I want to finish out with one team like a lot of great players have done, to stay with one organization their whole career and just be loyal to that. You never know. We’ll see what happens next summer, but I’m pretty sure I’ll be in a Spurs jersey for my whole life.”