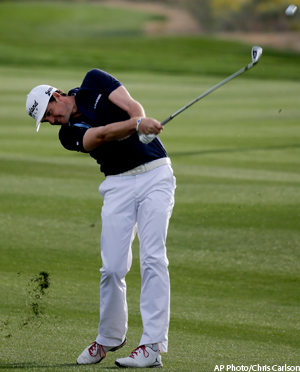 The PGA Tour is rife with big NBA fans, none as serious as New England native Keegan Bradley, a devoted Celtics fan well before he blew up by winning the PGA Championship in 2011. A St. John’s grad who can talk college hoops as well as the pro game, Bradley also boasts serious kicks cred, thanks to his wearing signature Jordan Brand golf shoes on the course.

SLAM: Tell us about your love for the NBA as well as the Celtics.

Keegan Bradley: I absolutely love the NBA. It’s the only sport where I can watch two teams I don’t care about at all and get into it. I will watch Golden State play Memphis. That said, I am a big fan of all the Boston teams, and I have to say that I care a little bit more about the Celtics than I do the Patriots, Red Sox or Bruins. I grew up in Vermont, and from ages 13-15, a friend and I would take the bus down to Boston for games a few times a year. We’d buy the $18 upper-deck tickets and sneak into the best seats, get kicked out, go back upstairs, then try it again. I also watched close to 80 games a year on TV some of those seasons. Now I have League Pass so I can watch the Celtics or any other team.

KB: Paul Pierce, Antoine Walker, Kenny Anderson, those guys. They had some good teams that couldn’t get past the Nets in the Playoffs.

SLAM: How about when the Pierce/Garnett/Ray Allen group came together and won the Finals. What do you remember about that group?

KB: Very special. I just love Kevin and Pierce. I think they both fit the mold of what it takes to be a great Boston athlete.

SLAM: You went to St John’s for college; they weren’t very good then but obviously it’s a great program. Did you follow them? Do you follow them now?

KB: Yeah, I went to as many games on campus or at Madison Square Garden as I could. The golf team would be traveling for tournaments sometimes but as long as I was around, I was going to their games. The most special thing for me with St John’s basketball was getting to develop a good relationship with Lou Carnesecca. Such a nice man. I haven’t met Coach [Steve] Lavin yet but I think he’s doing a good job and they’re definitely making a comeback.

SLAM: The thing that really put you on our radar was when you wore those Jordan Brand cleats at the President’s Cup last fall. Do you have a formal relationship with them?

KB: Yes, I’m an official Jordan athlete and I’m very proud of that. I’m the first golfer to be with them. It’s funny, nothing I’ve ever done in my career, on or off the golf course, has caused as much of a stir as me being with Jordan Brand. It speaks to how much people care about him and the shoes.

SLAM: I wouldn’t say golf was seen as a “cool sport,” particularly before Tiger started playing. But I do remember always being aware of MJ’s interest in the game. It’s like, even before he went to play baseball, any story on him usually mentioned that if he wasn’t playing basketball, he’d be playing golf. You were a young sports fan who was showing promise as a golfer; did knowing that a guy like that loved golf make it seem cooler to you?

KB: Definitely. I think it’s really Michael and Tiger that made golf cool. I don’t think I’ve ever met anyone who liked golf more than Michael Jordan.

KB: Nope. He is a golf fanatic. He only plays 36 holes at a time. When we’re both in Florida at the same time I play with him every day. It’s an incredible thrill to have become friends with him and to get to play with him.

SLAM: I know what it means to “play with Michael Jordan.” Is he playing with a vanity handicap that makes him sound better but makes him easier to beat, or does he play to a real number?

KB: When I play him, I give him 11 shots, and we have great matches. He wins sometimes, and I win sometimes. I have to say, there is no better feeling than to beat Michael Jordan in anything, golf included.