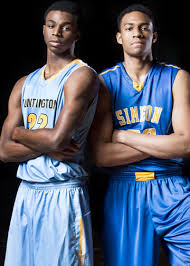 The first matchup will be the first time February 24, 2008, when No. 2 Tennessee defeated No. 1 Memphis, who was ironically coached by Kentucky head man John Calipari, 66-62. The two teams haven’t played since 2005, when Michigan State knocked Kentucky out of the NCAA Tournament, 94-88 in two overtimes.

Beyond the fact that John Calipari vs. Tom Izzo could be college basketball’s best coaching matchup this year, it’s quite possible that we’re seeing several future NBA All-Stars in this game. Michigan State’s Adreian Payne and Gary Harris will almost certainly play in the League next year, while Kentucky has its usual bevy of freshmen NBA prospects, headlined by potential top-three pick Julius Randle, James Young, Andrew Harrison and Aaron Harrison.

Both teams have been dominant so far this season. Kentucky has trounced UNC-Asheville and Northern Kentucky, 89-57 and 93-63, respectively. The Wildcats are led by Randle, who has been a monster this year, averaging a team-high 22.5 points and 14.5 rebounds per game. As for the Spartans, they looked fantastic in their matchup with McNeese State, winning 98-56 behind 20 points, 10 rebounds and 6 assists from Harris.

The night’s second game features another marquee coaching matchup, with Duke’s Mike Krzyzewski facing off against Kansas’s Bill Self. However, all eyes are on the matchup between two freshmen who have been both labeled as (possibly) the next LeBron James—Duke’s Jabari Parker and Kansas’ Andrew Wiggins.

Parker, a 6-8 forward from Chicago, shined in Duke’s 111-77 obliteration of Davidson on Friday night, putting up 22 points, 6 rebounds and 2 assists on 80 percent shooting for the Blue Devils. Wiggins, a 6-7 guard from Ontario, wasn’t as impressive in the Jayhawks’ 80-63 victory over Louisiana-Monroe, but he did put up a very respectable 16 points, 3 rebounds and 2 assists.

The two teams haven’t played since November 23, 2011 at the Maui Invitational. Duke, led by 17 points from both Ryan Kelly and Mason Plumlee, overcame a double-double from Thomas Robinson to defeat the Jayhawks, 68-61.

Tonight will almost certainly shape the course of the rest of the college basketball season, and could possibly have an impact on the 2014 NBA Draft. Get ready, because tonight is one of college basketball’s biggest regular-season nights of all time.