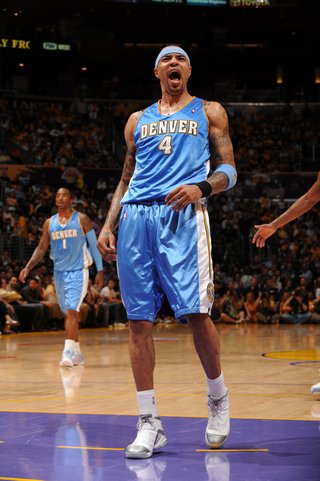 When the Playoffs started, many thought (and hoped) Cleveland and L.A. would breezily get through their respective conferences, setting up a titanic clash in the NBA Finals.

Things have been a little more complicated than that, and Kenyon Martin of the Denver Nuggets intends to rain on the entire parade.

Following the Nuggets’ huge Game 2 win in Los Angeles last night, K-Mart was feeling pretty good about his own team’s chances of making into the NBA Finals. From the Press-Enterprise:

Before the Conference Finals began, most were predicting a Lakers-Cavs NBA Finals. But with both Denver and Orlando having seized home-court advantage, Nuggets forward Kenyon Martin made clear that such a match-up is anything but inevitable.

“We’ve got a fight on our hands and the Cavs have a fight on their hands,” he said. “Everyone just thought us and and Orlando were going to go down so they can play. But that ain’t going to happen. I’m going to make sure that doesn’t happen. Go play NBA Live if you want to see that match-up.”

There’s no doubt that Cleveland and L.A. are facing a monumental challenge in the conference finals, but for a guy whose team has only beaten its opponent a grand total of once in the last two decades of postseason play to be making guarantees … that’s a bit bold, no?