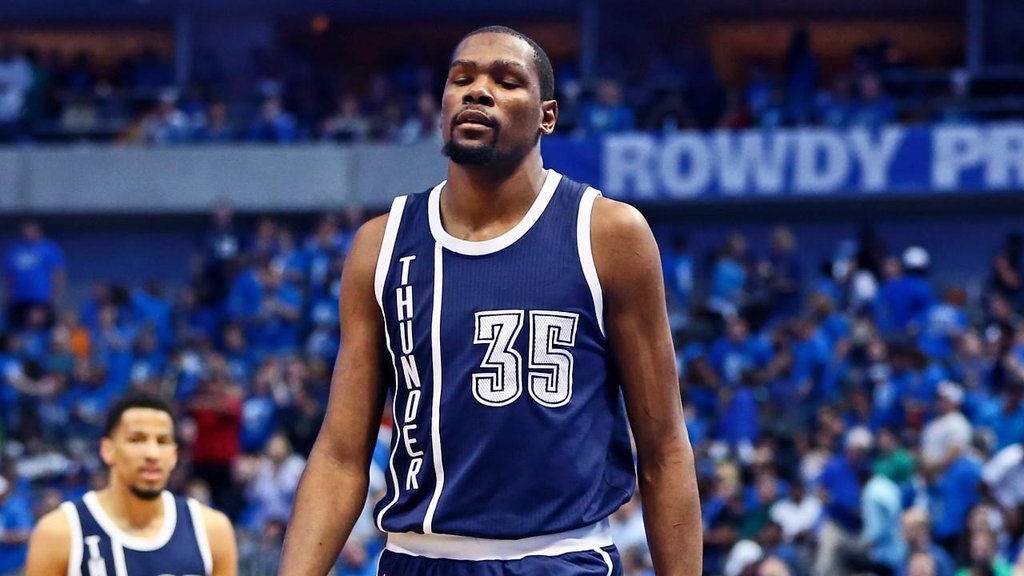 The OKC Thunder, with a chance to close out the Dallas Mavericks, will have Kevin Durant in the lineup Monday night after he avoided a suspension for his flagrant foul on Justin Anderson in Game 4.

I never saw this angle, this looks crazy! https://t.co/bYgek5BrKp

Durant was hit with a $15,000 fine, and teammate Russell Westbrook was also fined $25K for yelling profanities at a Mavs fan sitting courtside.

Kevin Durant didn't expect a suspension: "I got two points on my record, so I'm sure that's penalty enough." pic.twitter.com/mwcFSDRG7T

Westbrook finished with 25 points and 15 assists in the Thunder’s Game 4 win.

On a meaningless drive late in the game, Durant slugged Anderson with a forearm across the forehead. Durant apologized for the play postgame, chatted with Anderson about it and said the play was unintentional, just an aggressive block attempt gone awry. […] But the Flagrant 2 call stands, which could loom large later in these playoffs.

Per NBA rules, a player receives an automatic suspension after accumulating four flagrant points during the postseason. Durant now has two. So another Flagrant 2 or two Flagrant 1s would knock Durant out for a game, potentially becoming a huge factor against the Spurs or Warriors, should OKC get there. […] So he has to be careful. And he’s a bit lucky. Because after Game 3, the NBA assessed him an after-the-fact technical foul for his elbow of Salah Mejri at the free throw line, labeling it a “physical taunt.” If that was instead ruled a Flagrant 1, Durant would already be at three points. Instead he’s at two.

“That’s not who I am. It was accidental,” Durant said. “I don’t have to be cautious out there because that’s not who I am … I got two points on my record. So I think that’s penalty enough.”