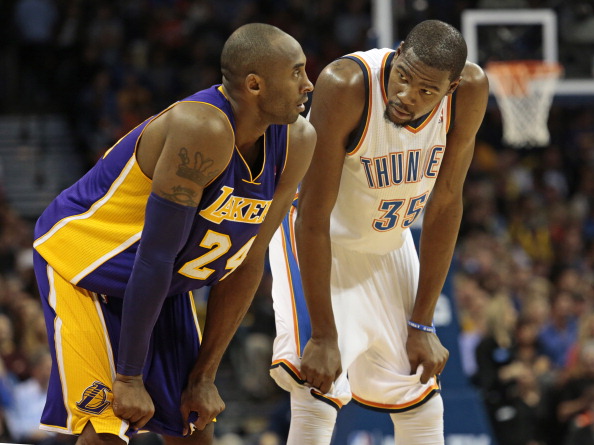 Thunder superstar Kevin Durant is in Spain as part of his promo tour for the Nike KD8.

. @KDTrey5 attracting quite a crowd in Madrid pic.twitter.com/d5ssUEpW6M

KD took time out to do some interviews with Spanish press, including NBA Maniacs, which asked him for his all-time starting five, among other questions. KD’s answer was translated to Spanish and back into English, so you can read the full translation below (shouts to Matt Moore of CBS Sports for finding it)…

But if you boil it down, KD’s all-time starting five is: Magic Johnson, Kobe Bryant, Michael Jordan, Tim Duncan and Shaquille O’Neal.

I would stay with Magic Johnson as a basis for their exceptional height, vision and be a triple-double machine. As guard Kobe Bryant is a legend and five-time champion. It’s been half-life in the NBA! Michael Jordan like three. Sorry for Larry Bird , but I have to let him out for Kobe. As a power forward is difficult, between Karl Malone, Tim Duncan … I stay with Tim Duncan . For longevity, the securities and the impact it has had and still has on the court. And Shaquille O’Neal as a dominant power forward.