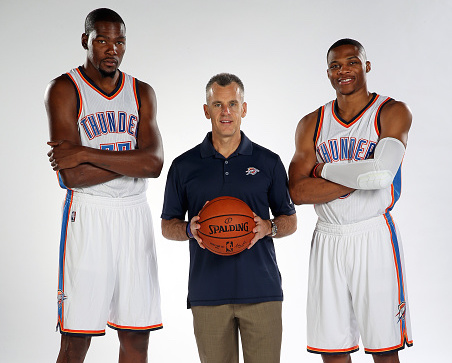 The Oklahoma City Thunder might be the most interesting team in the NBA this season. Beyond the fact that with two of the League’s best players they will almost definitely be title contenders, they also have the looming free agency of Kevin Durant next summer. Not only that, but they have a brand new head coach: former University of Florida coach Billy Donovan. So far, so good in regards to that hire, according to KD. From Anthony Slater of The Oklahoman:

Entire Thunder team has a refreshed feel to them in camp. Kevin Durant: "New system, new coach. Feels like a new era of basketball."

How it all plays out is still a mystery, but for now Durant—at least publicly—seems happy. Of course, we all know that wins and losses have a tendency to affect players’ moods more than anything.

What do you think of KD’s “new era” comments?