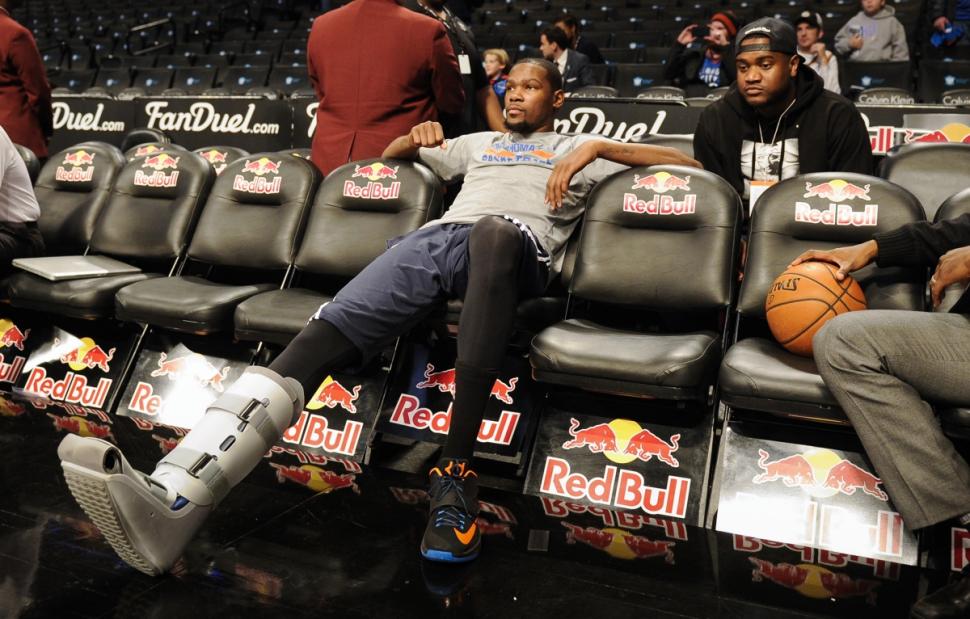 KD’s rehab from foot surgery is experiencing “peaks and valleys” according to Brooks, and there’s growing doubt about Durant’s return this season.

The NBA’s reigning MVP sat out Thursday’s practice with right foot soreness, and has been ruled out of Friday’s game against the Atlanta Hawks. Sunday will mark four weeks since Durant underwent a second surgery to eliminate that soreness.

Thunder coach Scott Brooks repeatedly referred to what Durant is experiencing as “peaks and valleys” in his recovery. But by the sound of it, the operative word seemed to be “setback.”

Brooks announced last Wednesday that Durant would return to the lineup “in a week or two.” But after delivering Thursday’s news, Brooks couldn’t say whether Durant now needs a new timeline. […] “I don’t know that yet,” Brooks said. “But with all of our players’ injuries we’ll always take the best interest of the players and always have a cautious approach.”

Complicating matters is the Thunder currently is in a fight for its playoff life, going back and forth with New Orleans on a near nightly basis for the Western Conference’s eighth and final playoff seed. After hosting the Hawks, the Thunder will have only 13 games remaining. The next contest comes Sunday against Miami, and unless Durant enjoys a drastic turnaround in a matter of hours it’s unlikely he’ll be available for that 2 p.m. tip-off.