Kevin Garnett is a Celtic 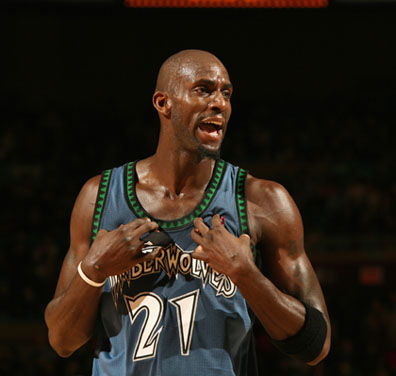 The blockbuster deal, for the most part, is completed. Unless something absolutely catastrophic happens in the next 24 to 48 hours, Kevin Garnett will be wearing green and white. The only thing left to determine is which jersey number he’ll wear since his #21 has been retired by the Celtics organization.

The Celtics will send Al Jefferson, Gerald Green, Theo Ratliff, Ryan Gomes, Sebastian Telfair, and two first-round picks to the Timberwolves for Garnett, terms both sides have agreed to in principle.

The 5-for-1 trade will be officially complete once issues concerning Garnett’s contract are resolved, but one Celtics official cautioned last night that the deal was not done and would not be complete until today at the earliest, despite reports to the contrary.

Personally, I like the trade for both teams. Sure, the Celtics gave up a little too much in order to acquire KG, but what other choice did they have? With Garnett, Ray Allen, and Paul Pierce, Boston now has a 2-year window to make serious noise in the East, and they should realistically be able to compete for a title. Danny Ainge, seemingly overnight, realized that the youth movement would have to be put on hold if he expected to remain gainfully employed in Boston.

If the Celtics don’t get to the Eastern Conference Finals in the next two years (at the very least), not only should Ainge be fired, but Kevin Garnett’s career has to be considered somewhat of a letdown.

As for the Wolves, they get a stud in Al Jefferson, Gerald Green (who could become the next Tracy McGrady…or the next Harold Miner; there doesn’t seem to be any in-between with him), Bassy (who will probably get moved again within the next two years), Ratliff’s expiring contract, and two first-round picks.

They weren’t a Playoff squad with Garnett, and not to say that they’re going to compete for a title anytime soon, but the Wolves will be competitive and along with Seattle and Portland, they immediately become one of the more intriguing teams in the Western Conference.