Kevin Garnett Not Retiring, Will Return to the Boston Celtics For Three More Seasons 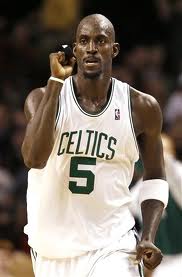 Hope you didn’t waste any effort planning Kevin Garnett’s retirement party. According to the Boston Herald, the lanky big man has informed the Boston Celtics that he’ll be returning to the team for the ’12-13 season, and potentially a year or two after that: “Kevin Garnett is staying with the Celtics. The Herald has learned this morning that Garnett has informed the club he will be back. The 36-year-old considered retirement, but ultimately decided to return for an 18th NBA season — and more. According to an NBA source and a source close to Garnett, the sides are working out the details of a deal that will be for at least two years and could possibly include a third. ‘The decision came down to whether KG wanted to keep playing,’ said one source. ‘And once he decided that he did, it was going to be Boston. He wasn’t going to leave Doc (River) and those guys and play anywhere else.'”