KJ: Sac-town Could Lose the Kings 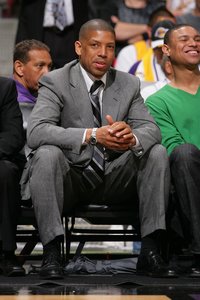 Kevin Johnson, who, somewhat amazingly is the mayor of Sacramento, is using whatever political clout he may have to affect NBA-related matters.

Johnson, often seen sitting courtside alongside the Kings’ owners, says that if Sac-town doesn’t get a shiny new gym (and soon), the Kings may not be long for Sacramento.

After learning that Arco Arena is considered unsuitable to host a major college basketball tournament, Mayor Kevin Johnson said Tuesday that Sacramento could lose the Kings if efforts for a new arena aren’t stepped up.

“If we don’t have a clear path to an arena in the not too distant future, then we as Sacramentans need to know that (the Kings) very well may look elsewhere,” Johnson said.

Johnson can huff and puff all he wants, but the reality is this: the economy being what it is, there’s no financing available to start construction on a new facility. The NBA wants something built at Cal Expo, but with no cash, those plans have stagnated (along with other potential sites within the city.)

The Kings are stuck with Arco Arena for now, but no one can quite say for how much longer.