Kevin Love on Trade from Minny: ‘I Knew That I Needed to Move on’ 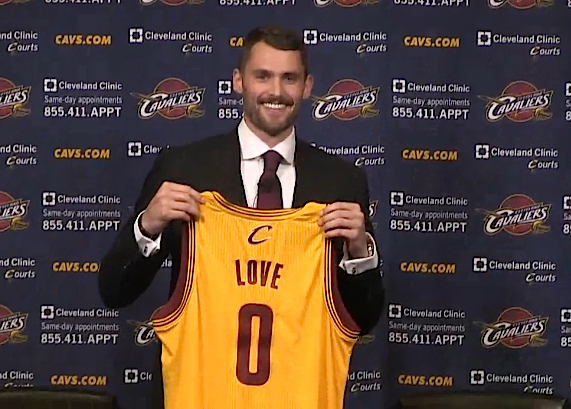 Cleveland Cavaliers All-Star forward Kevin Love reflects on his six seasons with the Minnesota Timberwolves in a first-person account.

Love admits that the endless losing turned him into the least fun guy in the locker room.

Love writes that, ultimately, playing for an NBA title alongside LeBron James and Kyrie Irving was too good an opportunity to pass up.

So I’d like to take a moment to thank the fans of Minnesota for six great years. I still remember sitting in Madison Square Garden when I was first drafted in 2008, thinking that if I could go anywhere it would be to the Timberwolves to work with one of my childhood idols, Kevin McHale. There are so many people in Minnesota who helped to shape my game and mold me into the player I am today. I’ll always be fond of going to Manny’s Steakhouse, and the support I got from the entire Minnesota community — even in tough times — is something I’ll remember forever. (Seriously, thanks for not burning my jersey, you guys.)

I grew up a lot – personally and professionally – during my time with the Wolves. I’ll be the first to tell you that I didn’t always handle things perfectly. We are all unfinished products. It’s not easy to handle the disappointment of losing when you’re in your early twenties. There were times when I wasn’t easy to be around in the locker room. It’s hard to be a leader when you don’t have the model — and when you don’t have a blueprint for what winning in the NBA looks like.

But I make no excuses. I posted my best personal numbers last season, and we still didn’t make the playoffs. Some of the backlash was pretty hard to take — I learned that there is apparently such a thing as an “empty stat” (I’ll try to remember the importance of that the next time I am boxing out for a rebound against Tim Duncan).

In the end, I was given the opportunity to move on, and I took it. My decision was about wanting to win. When I think back to being a kid shooting on an eight-foot hoop in my Shawn Kemp jersey, I never dreamed about putting up a triple-double or signing a max contract. I dreamed about holding up a championship trophy. In order to get to that place, I knew that I needed to move on.