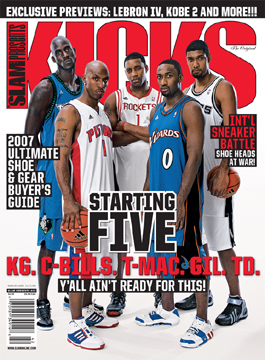 As recently as five years ago, the phrase “sneaker boutique” didn’t exist. Because there weren’t any. You needed new kicks, you visited the striped shirts at Foot Locker or the racks at Modell’s. The concepts of “upscale” and “sneakers” were entirely different, even as Air Jordan prices hit designer heights.

Now every major city has at least one high-class sneaker shop — here in New York, it seems like a new one opens every month. Shoes are presented like art objects or jewelry, styles are carefully selected, and the owners and managers are as into — or more into — shoes than you’ll ever be. We caught up with two of them.

KICKS: How long have you been in business?
LEE: We’ve been open for a little over two years?
KICKS: What’s the fastest you’ve sold out of any shoe? Which one was it?
LEE: Quickest was probably about 12 minutes. The Easter Air Force 1s, the clear Air Force 1s — you know, the invisibles — the Defining Moments Pack. They all sold out in about 10 to 12 minutes.
KICKS: What’s the most expensive shoe you’ve sold?
LEE: Probably the Defining Moments Pack.
KICKS: What’s the most popular style for you?
LEE: We carry a lot of SBs, a lot of quickstrike Air Force 1s. We’ve also got the Creative Recs, adidas, Vans, Converse.
KICKS: But is there one particular style that goes the fastest?
LEE: Mostly it’s the more limited ones.
KICKS: What shoe is your personal favorite?
LEE: The Jordan 11s, any Dunks.
KICKS: You have a big collection yourself?
LEE: Personally — I sold a lot of my pairs — I’m pretty much down to about 20-25 pairs. I needed some space in my room.

KICKS: How long have you been in business?
WILLIAMS: Three years.
KICKS: What’s the fastest you’ve sold out of any shoe? Which one was it?
WILLIAMS: To the line, basically. So however long it takes to sell out to the line, 20 minutes to a half-hour. The P-Rod Elites (Jordan) and the Futura same thing — mostly real limited Dunks. The Hawaii Dunk.
KICKS: What’s the most expensive shoe you’ve sold?
WILLIAMS: Just regular, probably the P-Rod Elite, $200.
KICKS: What’s the most popular style for you?
WILLIAMS: Dunks. Dunks are definitely the most popular, either high or low. It still seems to be going strong, there doesn’t seem to be much of a break. We still sell out. Not of everything, but most limited new releases will go in one day.
KICKS: What shoe is your personal favorite?
WILLIAMS: I’m a huge Jordan III fan, so that P-Rod Elite is one of my all-time favorites for sure. The white/cement Jordan III, I think, is one of the nicest shoes ever made.
KICKS: What are you sittin’ on, as far as a personal collection?
WILLIAMS: Oh, lots, but I don’t give out that information. Just lots.
KICKS: Is that because you don’t even want to know how many pairs you have?
WILLIAMS: No, no no, I don’t publically admit how many shoes I have, but I got a lot. I don’t want my wife to find out, that’s what it is.