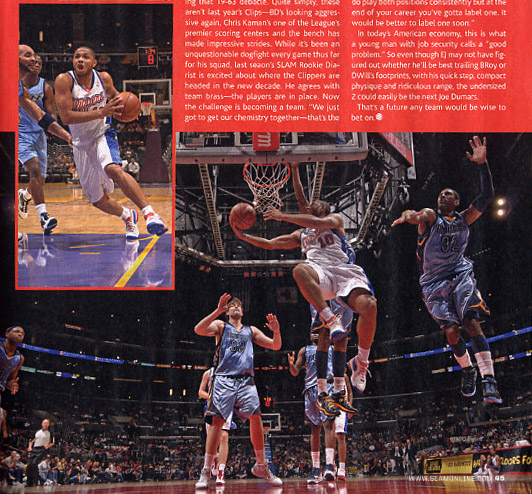 As we wrap up our features on the Dunk Contest participants, we now turn our attention to the Dunk-In Contest. Demar DeRozan and Eric Gordon will battle during halftime of the Rookie-Sophomore game, for the fourth and final spot the following night. They’ll have two dunks a piece and two-minutes for each dunk, with the winner chosen by the fans’ vote. People are hyping DeRozan to take it all, but don’t sleep on Gordon. The former Hoosier is more known for his sharp-shooting and limitless range, but the kid’s got hops. The second year Clipper is doing his best to keep his team afloat in the rugged West, and we’ll look to see some of that grit and determination in the Dunk-In.—Matt Lawyue

The summer of 2009 could be aptly coined The Prelude. The NBA free agency season before the free agency season. While major names swirled (LO, Vince), nobody’s fate carried more intrigue than Allen Iverson’s. Before ultimately being rescued by Philadelphia, the icon was left homeless, cradling his MVP trophies and scoring titles. The Bobcats, Grizzlies and Clippers expressed diet interest. At first glance, it was the Clippers nonchalance that seemed most surprising. Why? L.A.’s “other” backcourt slot is manned by Baron Davis, who’s been more playmaker than shot-taker since coming home (no more floor general duties for AI), and their frontcourt pressure rested on the mighty shoulders of the No. 1 Draft pick (no double-teams for Allen). Signing Iverson would’ve not only aborted his Philadelphia reunion but jolted LAC scoring and ticket sales. Except for one problem: The Clippers already had their AI in EJ. Eric Gordon Jr, to be exact—the quick driving, long range-shooting combo guard who’s several inches taller than Bubba Chuck and, more importantly, 14 years younger. With Clipper brass giving their sophomore guard immunity, a silent yet clear question was posed: Why pay for history when you can make your own?

Having been lauded since his junior high days in Indianapolis as one of the Midwest’s top young scorers, before enduring a rocky, albeit lime-lit, freshman year at Indiana, Gordon was the Clippers’ first-round pick (seventh overall) in the ’08 Draft. Before the first month of his career concluded, Eric was starting. The rest was the beginning of his story. “I knew I could play against anyone in this League after my first two starts,” Eric says. “I had over 20 points my first two games and that just set me off.”

Though Eric remained an impressive rookie, peers who dominated their team’s ball last season overshadowed him. Guards Derrick Rose, OJ Mayo and Russell Westbrook landed All-Rookie First Team honors. Gordon ended up on Team Two. Things are different now, though. Having begun this season as much a priority for L.A. as his classmates are to their teams, EJ breezed past Thanksgiving leading last season’s entire All-Rookie First Team in scoring (19 ppg) and FG percentage (50). Number one in your class is an achievement, and being placed above a living legend by your year-and-a-half-old employer is next-level flattery. Unless you’re Gordon. “I have no say-so on who [the Clippers] bring in or get rid of, but I think I’m as good as the other 2 guards out there,” he says. “I need more experience, but the way I’m playing now, I’ll be just as good as anybody.”

If you watch Eric Gordon play, you may notice a couple things. One is that there’s little he can’t do offensively. A perimeter defender’s migraine, the drives from EJ come in flashes and his range stretches to a few feet from the scorer’s table. Eric credits that range to childhood shooting and dribble drills instructed by former Liberty University star Eric Gordon Sr, who junior says can “really shoot. Like for real.” Pop’s December 25 Sagittarius clearly has an Aquarius’ gift for acquiring buckets, but the Clippers feel they’ve invested in more than just instant offense. Says GM and coach Mike Dunleavy: “Eric is a fantastic two-way player—explosive off the dribble, excellent three-point stroke. But he’s also a terrific on-the-ball defender. He’s got such quick feet and hands.”

Since Gordon’s 6-3 height has become irrelevant to his 2-guard ability, the question now is whether he can assume more PG duties in the future. Will the stocky guard be more Deron Williams or Brandon Roy? “Really I just like to be a true combo guard,” says Gordon before giving his grand scheme. “I think in a couple years, I’d rather play point guard ’cause I’m stronger and bigger than most guys at that position.”

Something else you may notice when you watch Eric is his unwavering resolve. No matter how crazy the surrounding storm, his poker face and confidence remain present. To make sense of the 21-year-old’s fearlessness in the face of inches-taller assassins like Dwyane Wade and Ray Allen, simply rewind to his most important college game. February 7, ’08: Gordon’s Indiana Hoosiers marched into the one arena that loathed their star freshman. The hate in Champaign stemmed from Gordon verbally committing to Illinois in high school, then reneging to enroll at Indiana once his dad’s buddy Jeff Meyer signed on as assistant coach (some speculate commitment and hiring were packaged). Needless to say, the Illini faithful didn’t take it well. Eric even received death threats via email from their “crazy fans.” “They just wanted me to go there, but kids change their minds all the time,” Gordon dismisses.

The first half of the grudge match was pure heaven for the home team and straight hell for Eric and Co. At intermission, target No. 23 was 0-4 from the floor with a single point scored and Indiana was down four. Second half, Gordon didn’t change a thing. He stayed aggressive, launching shots (one being a trey to send the game into OT). The final result was a Hoosier double OT victory with Eric tallying 19 points despite 3-13 shooting from the floor. It’s EJ’s “I’m good” air that has spelled success for the young gunner from his Mr. Basketball days in Indianapolis to this very ’09-10 season.

The calm Eric says is the offspring of experience and preparation. “I had a lot of hype when I was younger and my coaches and dad tried to keep me level-headed and playing my game within the team scheme,” says Gordon. “So I just let the game come to me. I don’t get impatient because things are gonna come when you already know what you need to do. You’ve gotta have a game plan because if you don’t, you’re gonna be lost out there.”

The preparation facet of Eric’s arsenal is what you can’t see with the naked eye—just the result of. There’s no stat sheet that can unveil how serious a student of the game Eric is. No opponent dapping E before tip-off knows that they were homework the night prior. (“Whoever we play the next night, I study the guy I’m guarding.”) By the time the ref sends the rock airborne, Eric Gordon has his dos and don’ts engrained in the membrane.

It’s preparation that has taken EJ’s stats a notch higher from his rookie year output. Preparation fostered by another L.A. guard who has burned “night-in and night-out consistency” into Eric’s head since he got Drafted. Maybe that other L.A. guard sees something familiar in young Gordon. “EJ has really incredible tools as a player,” praises Kobe Bryant. “I think if he commits to staying a true student of the game, he could really be special.”

Now if only the Clippers and Eric could progress congruently. Though at press time LAC had a losing record, their nine wins arrived weeks earlier than last season (even without Blake Griffin) and they’re in no jeopardy of repeating that 19-63 debacle. Quite simply, these aren’t last year’s Clips—BD’s looking aggressive again, Chris Kaman’s one of the League’s premier scoring centers and the bench has made impressive strides. While it’s been an unquestionable dogfight every game thus far for his squad, last seaon’s SLAM Rookie Diarist is excited about where the Clippers are headed in the new decade. He agrees with team brass—the players are in place. Now the challenge is becoming a team. “We just got to get our chemistry together—that’s the number one thing. We have the pieces and talent. We just got to play more together to figure everything out.”

There’s reason to believe the Clippers will be shaped by Eric Gordon’s image. Yes, they’ve got a paint monster coming who will spike their offensive potency, but everybody knows that unless the jersey reads “Chamberlain,” no big man can completely control the game without a steady backcourt partner. No team can dominate (not just win) without a 1-2 perimeter-paint punch. Dunleavy as well as owner Donald Sterling know this, which is why they’re using the young to forget the old. Gordon was just the first pillar in their compete while under-construction blueprint.

Gordon, too, has his focus on the future. For the benefit of the long pro career that lies ahead of him, EJ wants to maximize his skills with commitment. “I’ve just got to figure out whether I should be a pure point guard or a straight shooting guard,” he says, clearly not firm on his aforementioned PG preference. “I do play both positions consistently but at the end of your career you’ve gotta label one. It would be better to label one soon.”

In today’s American economy, this is what a young man with job security calls a “good problem.” So even though EJ may not have figured out whether he’ll be best trailing BRoy or DWill’s footprints, with his quick step, compact physique and ridiculous range, the undersized 2 could easily be the next Joe Dumars.

That’s a future any team would be wise to bet on.