This should be all taken care of before the regular season tips off, but Knicks shooting guard Ronnie Brewer tore his meniscus recently and will be off the court for approximately six weeks, the NY Post is reporting. Some more details: “Knicks guard Ronnie Brewer had a left knee arthroscopy for a medial meniscus tear that had occurred during the past two weeks, the team announced yesterday. He is expected to be out for approximately six weeks. That means the former Bulls shooting guard will miss the first two weeks of training camp, which starts Oct. 2. But Brewer tweeted he would play in the regular season opener. ‘If y’all haven’t already heard I had successful meniscus surgery. Started rehab this morning. Minor setback for a major comeback,’ he tweeted. ‘I appreciate the prayers and get well soons from everyone. Much appreciated. Will for sure be 100 [percent] for season opener.’ .. If Brewer is slow to recover, J.R. Smith could see an increase in minutes at the opening of the season.”

Ronnie Brewer to Reportedly Sign With the Houston Rockets 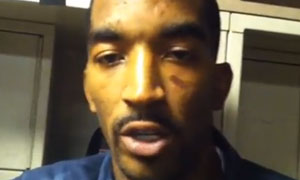