Knicks/Celtics, a day late and a dollar short. 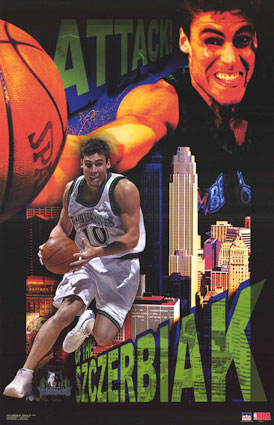 Just for the record, I didn’t steal Sebastian Telfair’s chain, nor did I shoot Fabolous. Figured I’d get that out of the way first.

Talked to Jamal Crawford for a while before the game. Didn’t realize that he played at the EBC this summer on a Seattle squad with, among others, Nate Robinson and Brandon Roy. They lost in the final to Team NYC, which was led by playground legend Skip To My Lou aka Rafer Alston. No Steph.

I’m thinking about declaring Renaldo Balkman the official player of this blog for the season. For starters, he’s a local, for seconders, I like the way he plays, and for thirders, we share the same initials. Now I just need to talk to him sometime. Supposedly he’s got quite the Southern accent, but I think I can get through that.

Hey, it’s the preseason! So Paul Pierce is on the sidelines in a suit, and he’s on the sheet as “DND — Strained Left Hip.” It should just read: “DND — All-Star.”

Jalen Rose, who wasn’t even in the building for Knicks/Nets, is starting. And he’s wearing adidas. Last year he was in LeBrons. Maybe his Nike deal ran out.

Somehow I completely forgot that Wally Szczfndjfhesfsk was a Celtic.

It’s Stephon versus Sebastian in the first quarter—and Sebastian SMOKES his cuzzo out of the gate. Breaks him off a couple times, drops dimes to the shooters, nails a trey. Kid can ball in the Garden, that’s for sure.

Michael Olowokandi is a Celtic, too? At least he cut those nappy dreads off.

Allan Ray starts for the Celtics, and I gotta wonder—is there a kid out there somewhere named James LeBron?

Steve Francis tries a dunk on the break and gets blocked by the front of the rim. Oh man, Maryland was so, so, long ago, huh Stevie?

You know, the idea of the uptempo Knicks is nice and all, and I’m sure the players are having a great time, but something just isn’t right. Too many mistakes, not enough discipline. They could really use a coach who would be really hands-on, one that would push them to play basketball properly. Hey, Larry Brown’s available, right?

Luke Jackson gets in the game for the Celtics. Been a while since I’ve seen him play, and it must be the same for the Knicks in-arena announcer, who calls him “Luke Wilson.” Bill Murray and Wes Anderson must be around here somewhere.

Celtics go up 10 early in the second quarter in front of another half-empty gym. Hooray, preseason!

Wally Szczcnvjdfsghd,jakviak commits a hard foul on Renaldo Balkman on a dunk attempt, sending him to the floor directly on his dreads. He gets up and hits one of two, while the ever-impartial MSG broadcast replays Wally’s hard screen on Steph last year that messed up his shoulder and further derailed the Knicks season. Because yeah, the two incidents were probably related.

Jamal Crawford for three—AND the foul. Pregame, Howard Beck of the NY Times pointed out that Jay Cee hadn’t hit a three all pre-season, and Jamal assured him that that particular streak would end. Yep.

There’s a new in-arena promotion—a go-kart race pitting a girl against a boy in pedal cars. The girl’s is defective, as no matter how hard she pedals, the car doesn’t move. There’s probably a good NBA/WNBA analogy here, but I’m not gonna point it out.

Rajon Rondo may not have a jumper yet, but he’s got great moves to the basket, and some ill black and green Question lows.

The Knicks can get to the line OK, but they sure suck at shooting free throws. And they somehow get called for two palming violations. A disciplinarian head coach who stressed the fundamentals would probably—ok, I’ll stop.

Rajon Rondo catches a MEAN putback dunk, then steals the inbounds pass and converts a layup while being fouled. He misses the free throw, but damn.

Sometimes I wonder whether the Knicks have any plays at all.

Training camp is a good time to get a look at different players, and the Knicks have a bunch of guys on the roster trying to land a spot. Um, not that there are any. Which probably explains why Nikoloz Tskitishvili doesn’t play at all, and my main man Paul Miller gets all of 16 seconds. On the C’s side, Kevin Pittsnogle doesn’t do much better. Less than a minute for the tattooed terror.

Postgame, I roll up on David Lee to discuss the MLB postseason (he’s from St. Louis, I’m a Mets fan) and the fact that he seems to be one of the few players on the team that understands you’re allowed to move without the ball. Well, he and Balkman. “When we used to play against each other in college, we were always going after the same balls. Now he’ll get a rebound, and I’ll look at him like ‘that was mine!'” Well, at least there’s a couple guys I can pull for. Lee leaves with an “always nice to talk to you.” Ah, manners.
One less than usual. With the entire local media around him, Steph gets asked a question about the fans coming back. I’m pretty far away, talking to Knicks media guy Vince Jackson about something trivial. All of a sudden, I’m aware that Steph is pointing at me, and all the press folk are turning to look. Great. Afterwards, one of the guys tells me that he was pointing out my Mets hat, saying he hadn’t see me wear one before, implying that I was only supporting the Mets since they were in the playoffs. In effect, calling me a bandwagoner. Well, I’ve been a Mets fan longer than Steph’s been alive. And while I may not have worn a Mets hat to a Knick game before, I’ve definitely worn Mets t-shirts and jerseys. It’s not like I was wearing Yankee hats a few years back. It’s funny, you’d think someone who’s been upset by snap judgements before would avoid making them himself. Guess not.