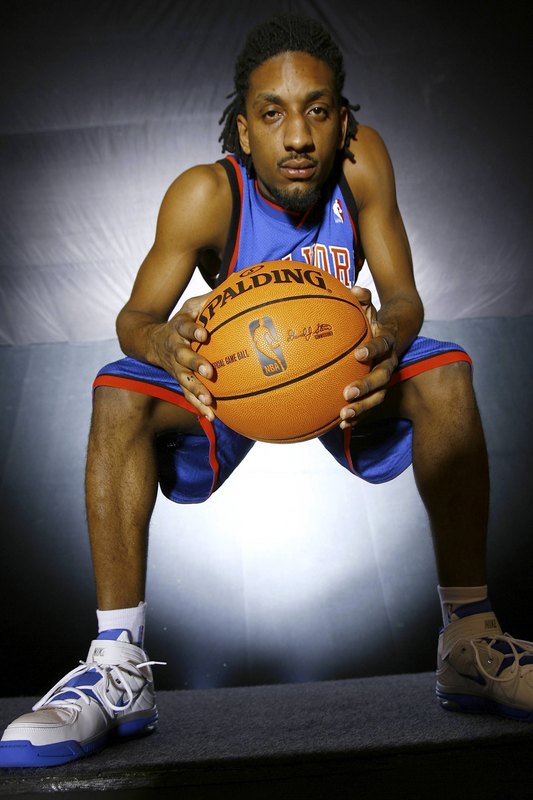 First off, just know that the result of Friday night’s game—a decisive win by the Knicks—means absolutely nothing. For starters, Jason Kidd and Vince Carter were in street clothes. And for finishers, it’s preseason NBA basketball, which means even less than preseason football. I remember a Knicks/Nets game from a couple years back where then-Nets Stephon Marbury and Keith Van Horn scored roughly 30 apiece, the Nets won handily, and everyone in the visitors locker room was giddy with anticipation for the start of the season (including us, who shot the duo for a cover). Then the season started, the Nets jumped out to a 1-10 (roughly) start, and that was that.

But still, it’s hard for me to skip ANY NBA game at the Garden—I’ll be there for the Celtics and Sebastian Telfair tonight—so I had no choice but to make the tough, five-block walk from my apartment to the World’s Most Famous. (Uphill both ways, of course.) And of course, I took notes.

• Not only is Stephon Marbury wearing his $15 Starbury Ones, somehow he’s convinced Steve Francis to wear them as well. Even better, with many a Steve & Barry exec in the house, someone was simply dispatched to the store (on 32nd and 6th) to pick up a pair of size 13s for Stevie Franchise. I’m assuming the $15 didn’t come out of his own pocket.

• Many a joke is made regarding the Knicks new uptempo offense, though none are made directly to the Knicks players. Instead, pregame is just a time to catch up with guys who I haven’t seen in a few months—mainly Steph, Quentin Richardson and Jamal Crawford. And, on the visitor’s side, Richard Jefferson.

• It is alleged that the carpeting in the vistor’s locker room is brand new. And, judging from the sharp chemical smell, said rumor is true. Either that, or some Nets bench guys are earning extra loot by running a meth lab in the back room.

• The arena is half-empty at tip-off (call me a pessimist).

• Confused by the acquisition of Jared Jeffries to begin with, I’m further confused by the fact that they gave him Allan Houston’s old No. 20. Not that I expected them to retire it or anything, but damn, at least let his uni get cold first.

• The Knicks get off to a 6-0 start before Nets rookie Marcus Williams answers with a trey. Marcus looks real good out there—if a bit turnover-prone—but hopefully Li’l Lawrence finds him some minutes somewhere.

• As good as it is to see Jason Williams back on the court (and alive, for that matter) he doesn’t look like the Jason Williams any of us remember. A step slow and a dollar short. Gotta think it’s a long shot that he sticks around for very long.

• With 9:06 to go in the first quarter, Eddy Curry commits a FLAGRANT FOUL on Richard Jefferson. I’m sorry, but in the preseason? That should merit an immediate ejection. Instead, RJ just hits the free throws, then catches an alley from Marcus Williams. As the game goes on, Eddy commits two offensive fouls, and basically does nothing to show that he actually knows how to play the game of basketball. If he put on the summer 15 or 20, it’s all in his head. Literally.

• Quentin Richardson is out there in the Jordan 9.5s. He mentions before the game that he occasionally gets makeups of shoes that he doesn’t even like—due to the fit—but he never tells the people at Jordan until AFTER a box of them arrives. Sneaky.

• Speaking of Jordans, Nate Robinson is wearing a pair of the Military Blue IVs, due to the fact that Nike has yet to send him his Force package (yes, the 5-7 Robinson will be a Force guy this year, along with bruisers like Elton Brand and Jermaine O’Neal—it actually makes more sense than you might think).

• You know what? Renaldo Balkman may have been a bit of a reach, but it looks like he’s going to do exactly what Isiah said he was going to do—provide energy, offensive rebounds, and general defensive disruptiveness. In other words, he’ll do what Jared Jeffries does for a lot less money.

• Ahmad Rashad is here, in a pink cashmere sweater, and Jerome James is on IR, with plantar fasciitis (or, in more common lingo, laziness).

• Yeah, by the start of the third quarter I’ve had quite enough. I’ll see plenty of these guys throughout the season.

• Postgame, in the locker room, Starbury talks about the differences between Zeke and Larry. He smiles a lot, says that he’s letting them just ball instead of forcing them to (I kid you not) worry about making the right play. The NBA, it’s player-tastic.