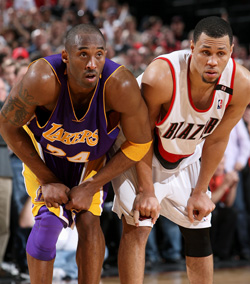 While many of you have been discussing (with utmost civility, of course) the No. 1 and 2 rankings in this year’s SLAMonline Top 50, another debate has been started.

Kobe Bryant was asked who the toughest player for him to guard in the Western Conference on the John Thompson Show the other day. This was Kobe’s response:

Is this a diss on the 2010 scoring champion? No. While casual fans see Durant as a face of the League and Roy as an oft-injured, not-quite-elite player, NBA players clearly have enormous respect for him and his game.

Kobe clearly values ‘complete’ players. Looking solely at weak points, Roy would have an upper hand. And it’s true Roy has had his success one-on-one with Kobe, which certainly is another highly valued offensive talent in Kobe’s mind.

Kobe’s displayed some serious Brandon Roy man-love for some time. And, in this writer’s eyes, this was not a slight toward Durant. Roy may not have weaknesses, but surely 21-year-old Kevin Durant is cut from a different cloth.

But game does recognize game.