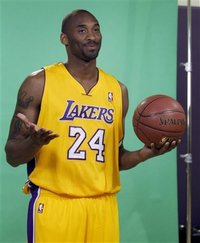 Kobe Bryant is an angry man these days. Well, moreso than usual.

Bean’s Lakers were blocked by the NBA from getting Chris Paul (which he blames jealous, rival NBA team owners for), then inexplicably traded away Lamar Odom for basically nothing to the team that swept them out of the Playoffs last season.

With a new coaching staff, an aging and uneven roster (and no clear-cut sign that someone like Dwight Howard is on his way to save the day), and a true rivalry now with the neighboring Clippers, Kobe Bryant isn’t sure just what the hell his team is doing these days.

Some reporters have even begun to speculate that Bryant may ask for a trade if the Lakers struggle this season, but despite his anger at what has transpired in the front-office of late, Kobe maintains that he still believes the team can challenge for a title

The Daily News has the quotes:

“I’m not sure what the hell the direction is, to be honest with you,” Bryant said in his first public comments since the Clippers acquired Paul. “It’s none of my business to really get into. The way they go about it is, they handle their business upstairs.”

Bryant said he expected another move in the coming days, perhaps for Howard. “You would think,” he said, still obviously troubled by the Odom deal. “There is no explanation for that. It’s business and money and things like that, but still you don’t send Lamar to the Mavericks. You know what I mean? That’s just my opinion. They’ve proven they can build a team here that can compete for championships,” Bryant continued. “I’m sure they’re going to do that now. I don’t expect this to be a situation like in 2005, when they said, `You know what? We’re just going to cut payroll and cut everything and not contend for a championship.’ “I don’t expect that to be the case. I expect them to still try to be aggressive and make moves to build a championship team. If that’s the case, I’ll stand out of the way and let them do what they do.”

There’s no telling what’s going to happen with the Los Angeles Lakers and Kobe Bryant in 2012. All we know, for sure, is that it won’t be boring.