Kobe Bryant Wants Teammates to Get Him Better Looks 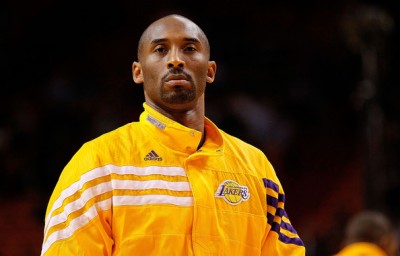 Following two straight games of stellar defense on Kyrie Irving and Brandon Jennings, Kobe Bryant struggled last night against Dwyane Wade on both ends of the floor. Following the loss to the Miami Heat, Bryant said he needs his teammates to step up offensively and help free him up. Per ESPN: “Not only did Bryant’s man on defense, Dwyane Wade, score 27 points on 11-for-20 shooting, but Bryant’s offense also struggled, as he scored just 22 points on 8-for-25 shooting (32 percent). Bryant, who leads the league in scoring at 29.7 points per game, said that alleviating some pressure on him on offense will in turn allow him to apply more pressure on defense. ‘If (guarding the opposing team’s offensive threat) is going to be something that I’m going to have to do for a while, I’m going to need my teammates’ help to free up offensively,’ Bryant said. ‘Like we did in the fourth quarter — create some picks for me, create some easy shots. That’s going to be tough for me to guard the top guy and come down the other end and have to go one-on-one every play. So, I’m going to need some help.’ He brought up the issue several times during his postgame remarks to the media. ‘I need some help offensively to save energy and not have to isolate and do things like that,’ Bryant said. ‘I’m going to need some picks. I’m going to need to catch-and-shoot like I did in the fourth quarter a little bit to make my job a little easier. I think the first three quarters of me just standing around the perimeter, the defense is praying for that. We have to do some things to free me up and get me in open spaces, this way I can be more active on the defensive end of the floor.’ Bryant started the game with just nine points on 3-for-16 shooting through the first three quarters before getting things going in the fourth, putting up 13 points on 5-for-9 shooting in the final frame thanks in part to getting open looks from the 3-point line off a screen set by Pau Gasol as well as a handoff assist from Gasol. ‘We talked about it going into the fourth quarter. I said, ‘Coach D man, goddamn. Come on, man. Come on, man. I can’t be standing out here like this all night long now,’ Bryant said, recalling a conversation with Lakers coach Mike D’Antoni. ‘We did a much better job of that. My teammates know. We got to pick each other up. I’m going to go out there and do what I got to do defensively, and then on the offensive end of the floor we’ll pick each other up.’ Point guard Steve Nash, the man responsible for orchestrating the show on offense, agreed that the Lakers can make it easier on his fellow 17-year veteran teammate. […] Howard suggested that the contributions of Wade, whom Bryant was assigned to keep in check, had a bigger impact on the outcome than LeBron James’ 39 points on 17-for-25 shooting on offense.”