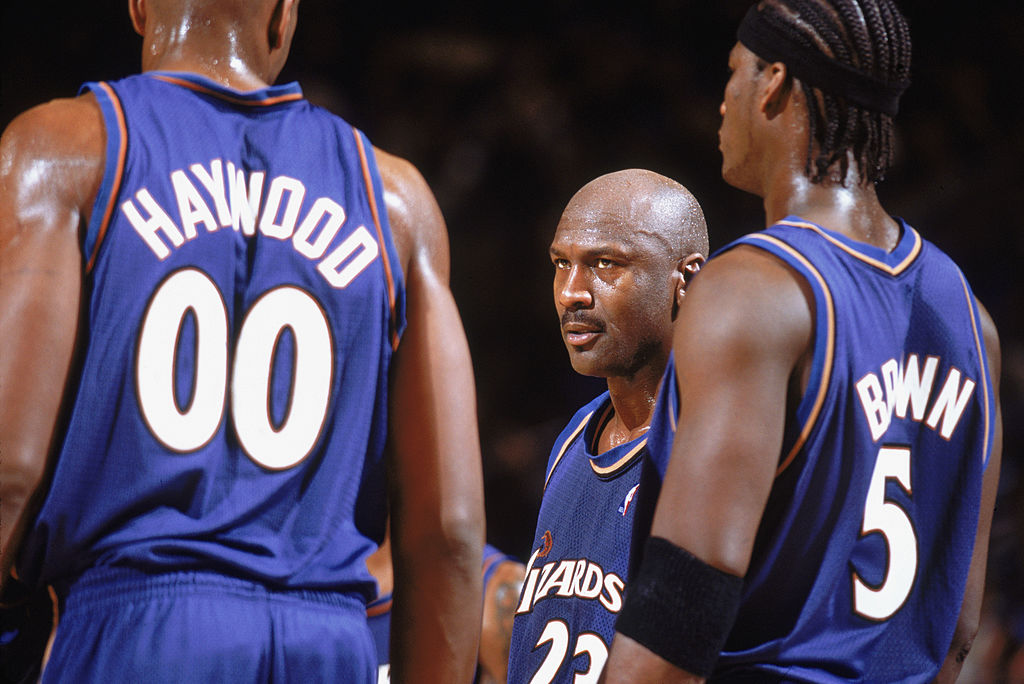 Kwame Brown was drafted first overall by Michael Jordan and the Washington Wizards in the 2001 NBA Draft, and things went sour quickly thereafter.

Brown tells HoopsHype that reports of MJ verbally and emotionally abusing him were greatly overblown.

Kwame Brown was very candid in this Q&A, discussing his NBA career, how he handled criticism, Michael Jordan, more: https://t.co/VDNZtdnddR

KB: “Someone wrote that my dad caused my scar with cigarettes, but that’s not true. My dad was in prison when I got the scar. A friend showed me that if you search for my full name on the internet, it said my name is Kwame James Brown. My middle name is Hasani. There’s so much misinformation out there that they can’t even get a name right! There was a report that Michael Jordan would make me cry in the front of the team (laughs). A guy who grew up like I grew up don’t really cry much. The report about him calling me a homophobic slur isn’t true.

“The funny thing is, all the people who write this stuff were never there so that means they were either making these things up to sell papers or hearing it from someone else who was wrong or who made it up. That’s just plain old gossip, and it’s sad that media outlets would write things they have no clue about. But I guess I get it. Sometimes a lie sounds better than the truth and it sells more papers or magazines. But it’s at someone else’s expense.

“I think there’s a bigger reason why the media constantly put a negative spin on things involving me: I think the league wants to justify the one-and-done rule. They act like, somehow, it’s better for a kid to go to college for four months and be a one-and-done player rather than going straight to the NBA. I think they’ve made me the poster child for why players shouldn’t go straight to the NBA from high school.”

Kwame, however, confirms the story Kobe Bryant told about him not wanting to catch passes when they were teammates in Los Angeles:

Speaking of not shooting, I’m sure you heard about the story Kobe Bryant told about you a few years ago. He said you guys were playing Detroit and you were getting wide open under the basket. But he says you didn’t want the ball because you were nervous they’d foul you and you would miss your free throws. What’s your side of that story and what was your reaction when Kobe first told the story?

KB: “Even if I did want the ball, it’s not like he would’ve given it to me! (laughs) He’s absolutely right about the free throw part, though. So what? My thing is, was I even playing basketball when he said that? I definitely wasn’t a Laker and I don’t know if I was even playing in the league. When I heard about that – and really anytime someone brings my name up out of the blue like that – I just wonder, ‘Why? What did you gain from that?’ Why is the best player in the game at the time mentioning little old me? It was flattering. (laughs) But he was absolutely right. I needed ankle surgery and shoulder surgery when I was playing for the Lakers. Mitch Kupchak asked me not to get the surgeries. He said, ‘With one ankle and one shoulder, you’re still the best defender we’ve got. All we need you to do is defend.’ I literally had trouble raising my arms. That’s why I don’t care when a fan hears this and laughs or whatever because they don’t know the full story. I know what was really going on and so do my peers. That’s why it seemed phony when Kobe said that, because Kobe acts like he’s my guy every time I see him. But then he’ll say something like this in an interview and I’m like, ‘That’s not really you.’ I’m the same way all the time. I’m never going to act differently for a camera.”