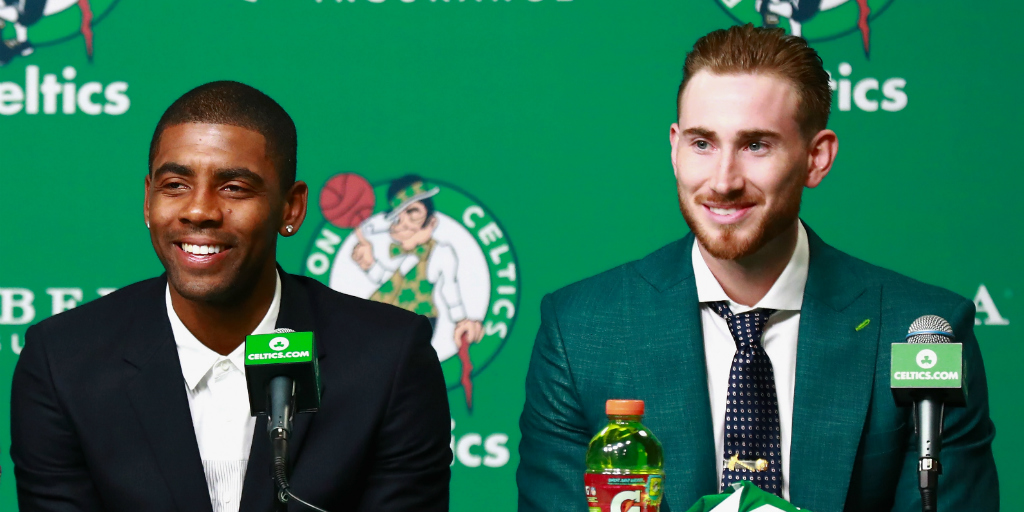 Kyrie Irving and Gordon Hayward were formally introduced as members of the Boston Celtics this morning and, as expected, much of the talk was about Kyrie’s decision to request a trade from the Cavaliers.

Irving told the assembled media that “it was time to do what was best for me” and that he wanted to be in an “environment that’s conducive for my potential.”

“It was my time to do what was best for me in terms of my intentions and that’s going after something bigger than myself and obviously being in an environment that’s conducive for my potential,” Irving said. “I think that statement is self explanatory, because it’s pretty direct in terms of what my intent is, and that’s to be happy and be with a group of individuals that I can grow with.”

“Me leaving there wasn’t about basketball,” Irving said.

The superstar point guard was asked about LeBron James and said that he has not spoken to him, but gave him props for “incorporating me into that special team that we had in Cleveland” and that playing with him was “awesome.”

“I’d be telling you guys a lie if I didn’t tell you how much I learned from that guy.

“The perfection of the craft comes in a variety of forms, and you watch and you ask a lot of the great players — what does it take to be great?”

“And I’ve had the unique opportunity to play with one of the greats, and it was awesome,” Irving said. “At times it was all over, just like it is in any other team, and when you look back and you’re eternally grateful for the moments that you had and you shared, you’re able to put peace with that journey and start anew.”

Cavs beat reporter Joe Vardon had a few interesting tweets during the presser, tweeting that it “drove Kyrie nuts” that LeBron was the center of attention when it came to non-basketball issues:

It drove Kyrie nuts that we didn't care what he had to say about politics, racial and social issues. Only LeBron

That's why the whole 'flat Earth' thing happened. Kyrie said something dumb on a podcast, and suddenly everyone cared

My favorite subject @WoosterEdu was rhetorical studies. THIS, folks, was the most important part of the Kyrie presser. pic.twitter.com/NwNqcSSvt0