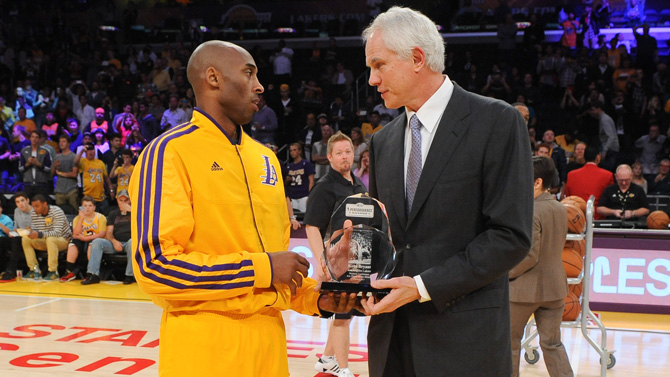 The Los Angeles Lakers can’t truly begin rebuilding until Kobe Bryant (and his two-year, $48.5 million deal) are off the books.

Until then, they’ll continue to be terrible, and yet oddly entertaining to watch.

And though some in the front-office have said they don’t want Kobe to walk off into the sunset just yet — and Bean himself hasn’t firmly indicated if he’ll hang up his sneakers in 2016 — Lakers general manager Mitch Kupchak isn’t planning on paying the 36-year old legend past next season.

He looked exhausted, like Willy Loman at the beginning of “Death of a Salesman”. […] “Just old,” Kobe Bryant said Wednesday, with his bodyguards, as ever, by his side, as he prepared to go to work for the 1,484th time in his professional life — if you also count the 220 playoff games in which he’s played.

“He has challenges every year,” Lakers general manager Mitch Kupchak said Monday morning. “I think his challenge in years past was solely on winning the championship. I think the last year or two, that has not changed, But because of the injuries to his knee and Achilles, that also turns into a formidable challenge. Yeah, I want to win a championship, but I’ve also had two major injuries. Can I get back to playing at a high level at my age? I think that’s a challenge that fuels him as well. He’s never been about one game or one week. I think as far as trying to continue to win, I think he’s challenged to show that he can recover from his injuries and play at a high level. Some of this is beyond his control.”

“All indications are, to me, from him, that this (two-year contract) is going to be it,” Kupchak said. “If somebody’s thinking of buying a ticket three years from now to see Kobe play, I would not do that. Don’t wait. Do it this year.”