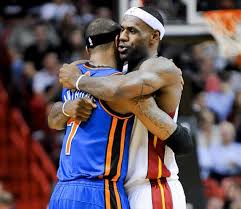 The Lakers, it seems, are going to have a tough season, but the summer of 2014 could be a franchise-changer. Hope you’re ready for another 12 months of free agency rumors/reports. Per ESPN.com: “The Los Angeles Lakers, whose plan to re-sign center Dwight Howard did not pan out this offseason, are poised to rebuild fast by focusing on the two biggest free agents of 2014 — LeBron James and Carmelo Anthony, front office sources have told ESPN. … Opinions are split on whether the Lakers can actually land James or Anthony, with one source calling it ‘realistic’ and another saying it was ‘far-fetched at this point.’ Nonetheless, the Lakers have made it clear they are positioning themselves for a run at one and perhaps even two of the superstars who could become free agents in 2014, by refusing to commit to any contract past this next season, multiple sources have said. Dwyane Wade, Amare Stoudemire and Chris Bosh also have early termination options on the five-year deals they signed in the summer of 2010. Luol Deng, Danny Granger, Andrew Bogut and Dirk Nowitzki will be unrestricted free agents next summer. James, of course, is the biggest prize. But unlike in 2009 when James’ free agency options the following summer were on his mind, sources have told ESPN that James isn’t even considering his 2014 decision yet. …  Anthony’s plans also remain unclear for next summer, but one source close to the situation told ESPN that it would ‘make sense’ for him to exercise the early termination option on his contract after next season to become a free agent and secure either a four- or five-year extension. Basking in the glow of a second title, James recently completed a Nike camp in Las Vegas and has a promotional tour planned to the Philippines and China. Then he will turn his focus to his wedding, which is planned for September in San Diego.”