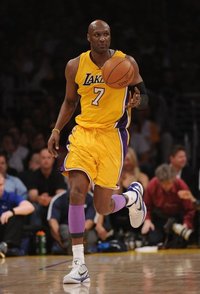 More craziness from the ongoing Chris Paul trade/no-trade fiasco, as it fell apart once again. So, the Lakers elected to send a frustrated Lamar Odom to their Western Conference rival Mavericks. Wait, what?! Yes. Obviously, this can’t be the last of their moves, right? Per the LA Times: “Two days after getting rebuffed by the NBA in an apparent deal for Paul, the Lakers sent forward Lamar Odom to Dallas for the Mavericks’ first-round pick in the 2012 amateur draft. ‘It’s a done deal,’ said a person familiar with the situation who was not authorized to speak publicly. The Mavericks might also send the Lakers another unspecified draft pick. It was not immediately clear if the move was a straight salary dump or a circuitous effort to try to get Howard down the road or, less likely, Paul. Next year’s draft is considered deep, but the Mavericks, the defending NBA champions, aren’t expected to have a high selection. The Lakers lost depth in the front court and a solid character in the locker room. Odom, 32, was the sixth man of the year last season after averaging 14.4 points and 8.7 rebounds. He is owed $8.9 million this season and $8.2 million next season, of which only $2.5 million is guaranteed. The Lakers also received a traded-player exception worth Odom’s salary this season. Trade exceptions are difficult to explain, but the Lakers can obtain a player from another team by trading only a draft pick if the player makes less than $9 million. Teams have exactly one year to use a traded-player exception. Acquired by the Lakers in 2004 as part of the Shaquille O’Neal trade, Odom was disturbed to be part of the voided Paul trade and did not take part in practice the first two days of training camp. He showed up at the team’s training facility Saturday only so he could take a physical. A favorite of Lakers followers, Odom was not happy with ‘the way things had been going’ in recent days, according to a person close to Odom who was not authorized to speak publicly. Odom is, however, content to be going to Dallas, the person said, and received a welcoming phone call from Mavericks owner Mark Cuban late Saturday night.”