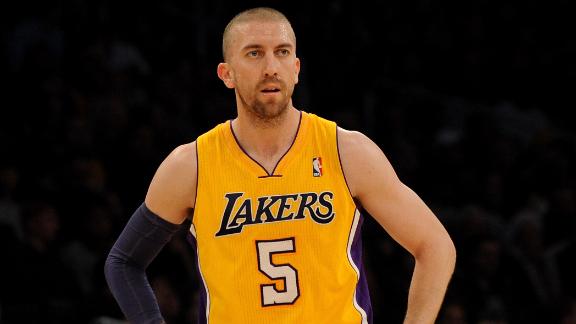 The rebuild in Los Angeles is underway: the Lakers announced Wednesday night that they shipped veteran guard Steve Blake to Golden State in exchange for Warriors guards Kent Bazemore and MarShon Brooks (24 and 25 years old respectively.)

The trade will save the Lakers almost $1 million in salary the rest of the season, and roughly $3 million in luxury taxes.

Steve Blake, 33, was caught off guard by the deal – he found out about it while warming up to face the Houston Rockets last night.

Per the LA Times and CSN Bay Area:

“Real mixed emotions,” Blake said after giving quick goodbyes to teammates, coaches and team personnel. “The hardest thing is for my family, really. I’ve got a wife and three little kids and now I’m going to have to spend four months probably away from them.”

“Absolutely. I’ve loved my time here,” he said. “When you spend someplace this long, you start to get comfortable and we loved where we lived and loved the schools my kids were in, always loved the support of the fans and ownership … This is one of the best places I’ve ever played at and in the future if they wanted me back, I absolutely, definitely would consider it.”

“He’s someone we’ve been looking at for a while,” Warriors CEO Joe Lacob said at halftime Wednesday night. “He’s a good player, doesn’t turn the ball over very much and is capable of playing at any time.

“We’re pretty pleased we were able to complete the deal.”

Kent Bazemore and MarShon Brooks were glued to bench in the Bay, and the Warriors estimate that they’ll be taking on $400,000 in luxury tax with this move. Both guards will be free agents in the summer.

Steve Blake goes from a lottery-bound trainwreck to a Warriors squad looking to make noise in the Playoffs, but he’ll have to fight for minutes in a crowded backcourt. Blake averaged 9.5 points and 7.6 assists in his fourth season with the Lakers. He’ll be a free agent this summer.