Lance Stephenson on His Time in Charlotte: ‘A Star Normally Gets the Ball’ 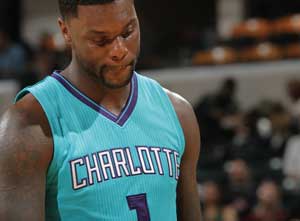 Although there were high hopes for Lance Stephenson upon his signing with the Charlotte Hornets last year, the star potential was definitely not reached.

His stat line wasn’t exactly stellar (8.2 points, 4.5 rebounds and 2.1 turnovers per game), and he wasn’t getting the touches he wanted. Stephenson certainly believes he wasn’t treated like a star at all.

More from The Score:

“I don’t feel that,” Stephenson told the OC County Register’s Dan Woike of Cho’s starry comments. “I was just sitting in the corner. That’s not trying to be a star. A star normally gets the ball.”

Stephenson has a point about not receiving the amount of touches a star player normally commands. Stephenson averaged the fifth most touches per game on the Hornets last year, behind decidedly average players in Marvin Williams and Cody Zeller, per NBA Stats.

When he had the ball, however, Stephenson would often refuse to pass. He averaged the most time of possession for a non-point guard, while putting up a career high in usage rate.

Stephenson blames that on the Hornets for misusing his skillset.

“I think the way they wanted me to be a star isn’t the way my game is,” Stephenson said.